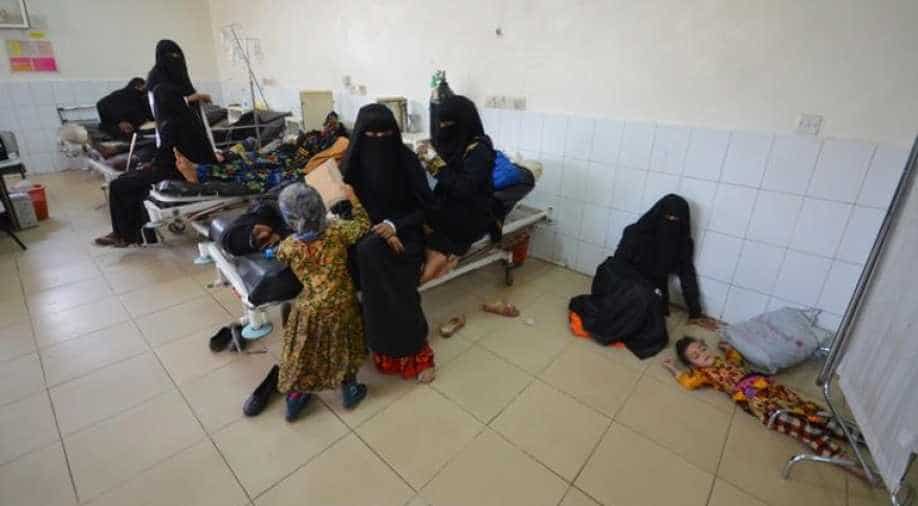 A girl infected with cholera lies in a hospital room in the Red Sea port city of Hodeidah. Photograph:( Reuters )

Cholera hits Yemen hard and local hospitals face shortage of space and medicines. The country is the poorest in the Arab world and after two years of civil war is on the brink of famine

A cholera outbreak in Yemen has killed 180 people since April 27, the International Committee of the Red Cross (ICRC) said on Monday, hours after the Houthi-controlled health ministry said 115 had died from the disease in the capital Sanaa.

ICRC's Dominik Stillhart told reporters in the Yemeni city of Aden there were 11,000 more suspected cholera cases across the war-torn country. Authorities on Sunday had declared a state of emergency in Sanaa over the outbreak and called for international help to avert disaster.

Hospitals are short of space and medicine is in short supply as people struggle to cope with the bacterial disease.

Cholera is normally contracted by consumption of water and food contaminated by human feces. It leads to massive dehydrating diarrhoea attacks along with vomiting and cramps which if not quickly healed can kill a person in a few days.

Dominik Stillhart, director of operations at the International Committee of the Red Cross (ICRC), defined the situation in Yemen as "catastrophic". During a press conference held in the country's capital city of Sanaa, he told reporters, "There are people in the gardens, and some even in their cars with the IV drip (intravenous infusions) hanging from the window. There are up to four cholera patients in one single bed."

The disease is spreading nationwide and Mr. Stillhart informed that since April 27 hospitals reported more than 8,500 suspected cases, 2,300 of which in the last week alone.

Hygiene is fundamental in combating the epidemy and a recent garbage crisis in the capital city is not helping. Mr. Stillart reported that piles of garbage lie on Sanaa's street, contributing to make the environment more prone to any bacterial disease.

On top of all this Yemen is facing a severe food shortage, to the point that the United Nations repeatedly warned that 17 million Yemeni citizens are on the brink of famine and the country is suffering from one of the world's worst hunger crisis. Children are suffering the most; according to UNICEF there are currently "462,000 children are currently suffering from severe acute malnutrition – a nearly 200 per cent increase since 2014."

"What is happening today exceeds the capabilities of any healthy health system, so how can we (cope) when we are in these difficult and complicated conditions," Yemen's news agency Saba quoted the Houthi-run administration's health minister Mohammed Salem bin Hafeedh as saying.

Cholera was perhaps the last thing Yemen needed. The country, the poorest in the Arab world, faces its third year of a war which split the nation between the Shiite Houthi rebels, reportedly supported by Iran, and President's Abdrabbuh Mansur Hadi government, strongly supported by a Saudi Arabia-led coalition. The United Arab Emirates, Egypt, Morocco, Jordan, Sudan, Kuwait, Bahrein, Quatar and to a minor extent Pakistan and Somalia are all part of the coalition.

Recent reports say that a new faction, led by Aidaroos Al Zubaidi, has announced its intention to make the southern part of Yemen independent, where the majority of the oil resources lie, adding more chaos to an already fragmented situation.

Since the beginning of the Arab's spring in Yemen in 2011, Al Qaida in the Arabic Peninsula (AQAP) has been able to seize the opportunity and establish their control over swathes of land. And, where there is al Qaida, the US army goes. Yemen has become the most recent chapter of America's war on terror. The US have no presence on the ground and mainly conduct raids and drone attacks alongside Saudi Arabia.

Houthi forces are mainly in control of the northeastern part of the country – where the capital Sanaa is located – and of the crucial Red Sea port of Hodeida.

Despite being less armed and less in numbers they have been capable of inflicting continuous losses to Saudi troops.

This does not seem to worry Saudi's deputy crown prince Mohammad bin Salman, who said in a recent interview that his country could end the war in a few days by sending the ground force in, but they prefer to wait in order to avoid too many civilian casualties.

According to the UN, nearly 10,000 have already died in Yemen's war, a conflict which is once again the result of a hegemony struggle between Saudi Arabia and Iran in order to establish their primacy over West Asia.

In the meanwhile the Saudi-led coalition is imposing a full-scale blockade against the Houthi-held areas which, given the country's location, has practically grounded its economy.

The country's main port of al Hodeidahis under Houthi's control and its functioning – once crucial in providing all kind of goods to 80 percent of the country – is way below normal with the immediate result of a hike in basic goods prices.

A possible Saudi-led military operation to retake control of the port is on the table, but it could result tremendosuly costly in terms of civilians deaths. The UN has warned of an imminent tragedy in case of fighting involving the port ant the adjacent city where 400,000 people live.

"The Houthis will do whatever they can in order to defend the al Hudaydah port," says Luca Nevola, research associate at the Yemen College of Middle Eastern Studies. "They know that the port is the only source of whatever goods they need in order to survive, without al Hodeidahthe Houthis will be in great difficulty."

Saudis have recently renewed their intention to attack the port in order to prevent smuggled weapons to reach the Houthis. The coalition stated that they will open alternative routes, through the ports they control in the south.

Even if the US are fighting alongside Saudi Arabia, they are not expected to take part in an eventual operation to attack the port.

Yemen will most likely be on the table during the discussions that US President Donald Trump will have with the Saudi government during his visit, scheduled for May 19.

'Weapons' will also play a role in Trump's visit; A senior White House official told Reuters that the two countries are rushing to close a series of arm deals worth $100 billion.

Despite disagreement over the al Hodeidah port eventual attack, it does not seem that US support for Saudi Arabia's role in Yemen's war is not in doubt.