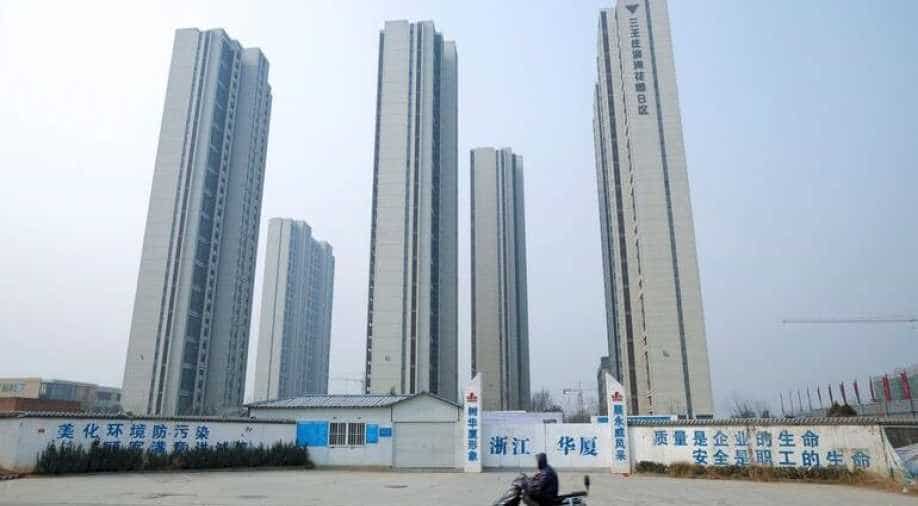 Wary of property bubbles, Chinese regulators have vowed to refrain from stimulating the real estate sector as they roll out measures to boost the broader economy hit by the Sino-US trade war and slowing consumer demand.

China's new home prices grew at their weakest pace in nearly a year in August as a cooling economy and existing curbs on speculative buying put a dent on overall demand.

Wary of property bubbles, Chinese regulators have vowed to refrain from stimulating the real estate sector as they roll out measures to boost the broader economy hit by the Sino-US trade war and slowing consumer demand.

Average new home prices in China's 70 major cities rose 8.8 per cent in August from a year earlier, compared with a 9.7 per cent gain in July and the weakest pace since October 2018, Reuters calculated from official National Bureau of Statistics (NBS) data on Tuesday.

Monthly basis, average new home prices rose 0.5 per cent in August, less than July's growth of 0.6 per cent and the smallest increase since February. However, it still marked the 52nd straight month of gains.

Most of the 70 cities surveyed by the NBS still reported monthly price increases for new homes, though the number was down to 55 from 60 in July.

The property sector has held up as one of the few bright spots in the world's second-largest economy.

China's property investment grew at its fastest pace in four months in August, data showed on Monday, in contrast to a protracted slowdown in industrial output and investment.

But some analysts said the rebound in investment was likely due to developers rushing to meet government requirements before they can start sales on growing financing pressure and worries about the market's prospects as regulators have made clear that supervision is only set to tighten.

Yang Yewei, a Beijing-based analyst at Southwest Securities, noted some developers have opted to cut prices, although the government's tight control over new launches suggests they may not tolerate large discounts.

A resilient real estate market has provided some cushion for the world's second-largest economy as policymakers try to revive the ailing manufacturing sector and restore flagging consumer confidence amid an escalating trade war with the United States.

But regulators are walking a tightrope, as rapidly-growing household debt and ever-rising home prices have also deepened fears about a sudden market correction and concerns over housing affordability.

In a sign the government has turned more hawkish on its housing policy as it manoeuvres to pump more credit into other areas of the economy, top Chinese leaders said in July they will not resort to using the housing market as a form of short-term stimulus.

"The policy impact of this meeting was in full play in August," said Xia Dan, an analyst with China's Bank of Communications.

Slower price increases may give the authorities breathing room as they refrain from stimulating the property sector but economists at Nomura expect some tightening measures to be eased around end-2019 as weakness in the economy becomes more pronounced.

"Any attempt to stabilise growth by choking credit to the property sector could backfire," they said, noting the sector comprises about one-quarter of China's GDP.

Price trends have been mixed lately, with some cities showing signs of rapid cooling while others are still plagued with overheating risks.

In August, softer prices were mainly in tier-2 cities, which include most of the larger provincial capitals.

Property prices there increased by 0.5 per cent on average monthly, easing from a 0.7 per cent gain in the previous month, the statistics bureau said in a statement accompanying the data.

However, Nanning, the capital of Guangxi Zhuang Autonomous Region in southern China, was the top price performer in the month, with prices surging 2.3 per cent on a monthly basis.

China's four top-tier cities, Beijing, Shanghai, Shenzhen and Guangzhou, had an average gain of 0.3 per cent from a month earlier, unchanged from July's.

Out of the 70 major cities the government tracks, price growth in the smallest tier-3 cities rose the most on a monthly basis, though their increase of 0.7 per cent was also in line with July's pace.

China's average residential property prices are estimated to rise 6 per cent in 2019 from a year earlier, according to a Reuters poll published in August.

The forecast was slightly higher than the 5 per cent projected in the last poll conducted in March but is significantly slower than the 9.7 per cent gain seen in 2018.