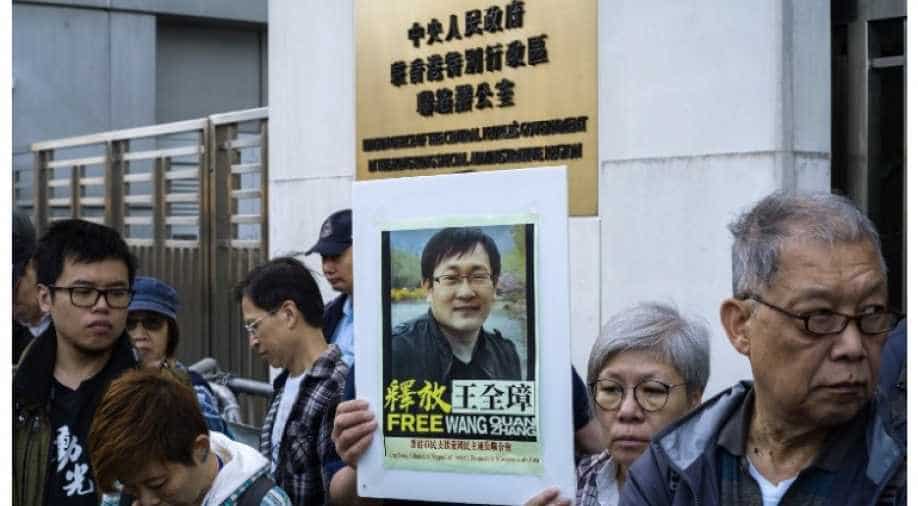 Wang Quanzhang, 42, who defended political activists and victims of land seizures, disappeared in a 2015 sweep known as the "709" crackdown aimed at courtroom critics of Communist authorities.

The trial of a prominent Chinese human rights lawyer took place Wednesday but was closed to the public because of "state secrets", a northern Chinese court said.

Wang Quanzhang, 42, who defended political activists and victims of land seizures, disappeared in a 2015 sweep known as the "709" crackdown aimed at courtroom critics of Communist authorities.

Charged in January 2016 with alleged "subversion of state power", Wang had been in legal limbo detained without a trial date until Monday, when his government-appointed lawyer finally contacted his wife with the court date.

"The defendant... was tried in the first instance of the Tianjin Second Intermediate People's Court today," the court said in a statement.

"Due to the state secrets involved, the court decided not to open the trial to the public. The verdict, in this case, will be pronounced at a later date."

The closed-door proceedings were conducted in a heavily-guarded courthouse in the northern city of Tianjin, with Wang's wife prevented from attending the session and at least two activists detained for protesting outside the building.

Wang's wife, Li Wenzu, was on Tuesday placed under de facto house arrest with "more than 20" security personnel outside her apartment.

In an account posted on Twitter early Wednesday morning, a supporter Wang Qiaoling detailed how she and Li were barred from leaving a Beijing housing compound by groups of police officers for over an hour.

"The authorities in cases like these see the defendant as their enemy and anyone close to them as either a potential tool to be manipulated... or as another potential enemy to be controlled," Eva Pils, a professor specialising in human rights law at King's College London, told AFP.

"Placing Li Wenzu under house arrest would fall in that category."

Just before 10:00 am (0200 GMT), AFP journalists witnessed Heilongjiang activist Yang Chunlin getting arrested after he protested outside the court in Tianjin, describing the situation as "fascist rule" and "absurd".

Several plainclothes officers set on Yang and bundled him into a waiting black SUV.

Witnesses told AFP that Zhang Zhecheng, a rights activist from central China, had been taken away at about 8:15 am after holding up a sign calling for Wang's release.

Wang is charged with being influenced by "infiltrating anti-China forces", of being trained by a foreign group and accepting their funding, and of having subversive thoughts as a result.

The documents seen by AFP said he worked with Peter Dahlin, a Swedish human rights activist whose group offered training to lawyers who have tried to use the tightly controlled Chinese judiciary to redress apparent government abuses.

Wang is also accused of hyping up and distorting facts in cases he worked on, including a "cult" he was defending.

In Hong Kong, about 50 people marched to China's liaison office on Wednesday, demanding the release of Wang and others detained during the 709 crackdowns.

The sweep has dealt a blow to China's human rights defence movement, with most lawyers either jailed, disbarred or under heavy surveillance, making it impossible for them to work, said Human Rights Watch China researcher Yaqiu Wang.

"The Chinese government, paranoiacally, sees grassroots Chinese activists and organisations working with foreign non-government organisations as attempts to foment a 'colour revolution' to challenge the Communist Party's grip on power," she said.

Li and three others last week shaved their heads in protest of Wang's indefinite detention and tried to submit a petition to the courts but were prevented from doing so by the police.

"In the hope of getting the activist out earlier by succumbing to the threats of the authorities, family members and friends avoid bringing the case to journalists or calling for support on social media."