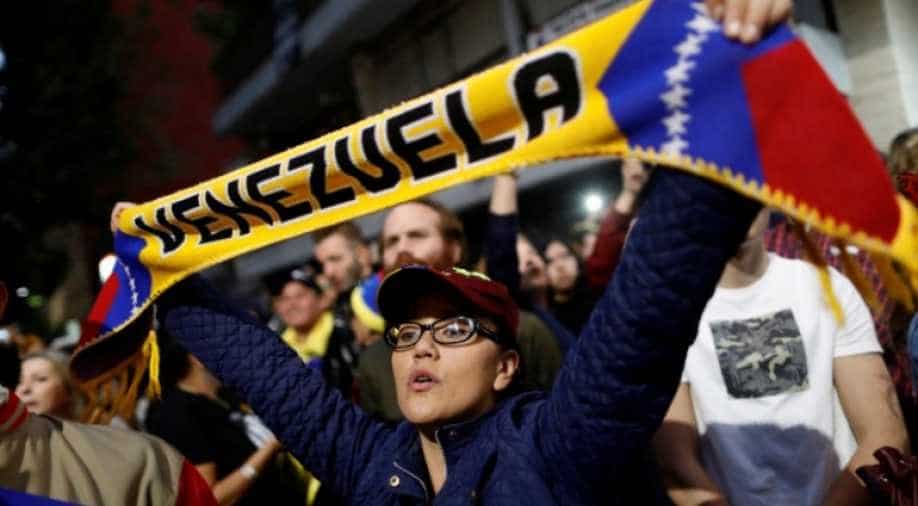 A woman holds a scarf as she gathers in support of Venezuela's opposition leader Juan Guaido. Photograph:( Reuters )

China is a close ally of embattled Venezuelan President Nicolas Maduro who is now locked in a bitter power tussle with Juan Guaido, the 35-year-old opposition leader, who has declared himself interim president.

China has backed multinational efforts in finding a solution to an ongoing power tussle in Venezuela, insisting that only a peaceful dialogue would solve the crisis in the South American country.

"Venezuela's affairs should be resolved by its people within the framework of the constitution and the law through peaceful dialogue and political channels," Chinese foreign ministry spokesperson Hua Chunying said in a statement late Friday.

Hua's statement came after Thursday's meeting on Venezuela of an International Contact Group led by Uruguayan President Tabare Vazquez. The meeting was attended by leaders of 14 other countries, including Germany, the United Kingdom, Spain, Italy, Portugal and Sweden.

A handful of Latin American countries such as Uruguay, Ecuador and Costa Rica are also part of the group.

Hua said China hoped all parties would play a constructive role in the peaceful resolution of the Venezuela issue, insisting that dialogue was the only way that long-term peace and stability could be attained in Venezuela.

China is a close ally of embattled Venezuelan President Nicolas Maduro who is now locked in a bitter power tussle with Juan Guaido, the 35-year-old opposition leader, who has declared himself interim president.

On Thursday, the International Contact Group agreed in Montevideo (Uruguay) to send a technical mission to the country and meet again in March to keep working towards a peaceful solution to the crisis, and prevent the situation from getting worse.

The contact group seeks a solution to Venezuela's political and economic crisis through dialogue and new presidential elections.

On its part, Uruguay, Mexico and the Caribbean Community (CARICOM) proposed the initiative Montevideo Mechanism, which seeks to achieve peace in Venezuela in four stages - immediate dialogue, negotiation, commitment and implementation.

The US, Canada, numerous Latin American countries and the major European powers all consider Maduro's May 2018 re-election victory to be tainted by fraud and have recognized Guaido, the speaker of the opposition-controlled National Assembly, as interim president.

Venezuela has been battling political, social and humanitarian crises with instability and breakdown of law and order, along with acute shortage of basic necessities, which has also led to large number of people fleeing to neighboring countries.

On Monday, the International Red Cross and Red Crescent Movement said they could not participate in the distribution of international humanitarian aid to Venezuela from Colombia if there was no prior agreement with those organizations.

However, the first shipment of humanitarian aid from the United States arrived Thursday in the Colombian border city of Cucuta, while officials have been working on means of getting them distributed.

Tensions increased in Venezuela on January 23 when the head of the opposition-controlled Venezuelan Parliament, Guaido, proclaimed himself interim president of the country.

The opposition considers the presidency of Maduro, who has been the head of state since 2013, to be illegitimate after he won "fraudulent" election last May without any meaningful competition.