'Bombogenesis' takes aim at US Northeast as snow sweeps South 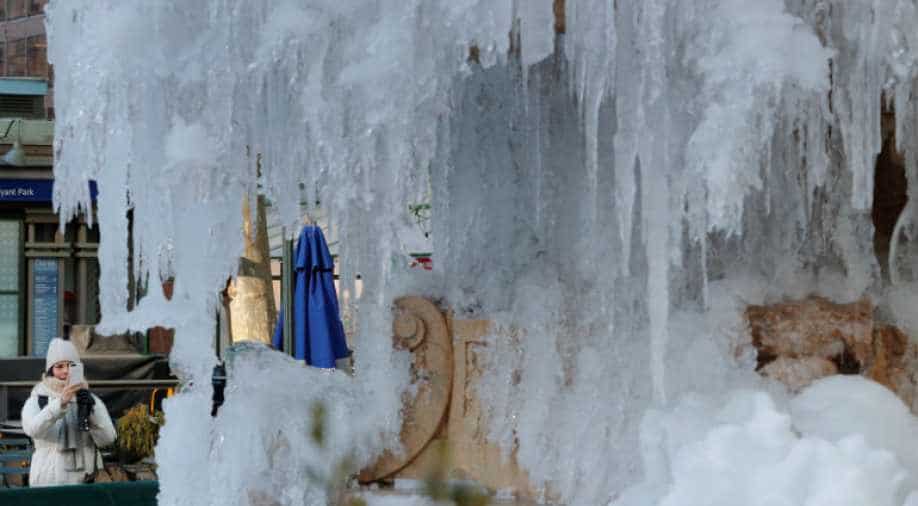 A rare winter storm hit the US Southeast on Wednesday, dumping snow on Florida's capital for the first time in three decades and snarling travel, while New England braced for a "bombogenesis" blizzard forecast to bring heavy accumulations on Thursday.

The governors of Florida, Georgia, North Carolina and Virginia declared states of emergency, warning residents to expect icy roads and freezing temperatures. In the northeast, work crews loaded trucks with road salt in advance of the storm.

The New York City Department of Education said it would close public schools on Thursday because of severe weather. The National Weather Service predicted New York could see 5-8 inches of snow and wind gusts as high as 50 mph on Thursday.

Much of the eastern United States is in the grips of a sustained cold spell that has frozen parts of Niagara Falls on the American and Canadian sides, played havoc with public works causing pipes to freeze and water mains to burst, and impeded firefighting in places where temperatures barely broke 20 degrees Fahrenheit.

The cold has been blamed for at least nine deaths over the past few days, including two homeless people in Houston. Police in Roseville, Michigan, said on Wednesday that a 96-year-old woman, recently diagnosed with dementia, was found dead in a playground, apparently having frozen to death after wandering outside in a robe and slippers.

The National Weather Service had blizzard warnings in effect from Virginia to Maine, with areas around Boston expected to see about a foot (30 cm) of snow on Thursday.

Snow would fall quickly during the day, at a rate of several inches per hour, with the storm intensified by the "bombogenesis" effect, private forecaster Accuweather warned.

"Bombogenesis," also known as a "bomb cyclone," occurs when a storm's barometric pressure drops by 24 millibars in 24 hours, greatly strengthening the storm.

The effect is seen along the Northeastern coast every winter, but this storm will be particularly powerful, said Judah Cohen, a visiting scientist at Massachusetts Institute of Technology.

"This one is unique in how quickly the pressure is going to fall," Cohen said. "The pressures could rival a Category 1 or Category 2 hurricane."

An arctic air mass will remain entrenched over the eastern two-thirds of the United States through the end of the week.

NOT FIT FOR MAN NOR BEAST

At a news conference, South Carolina Governor Henry McMaster warned people in the eastern part of the state to stay indoors if possible and to keep pets indoors.

"If they can't get in the heat, they'll freeze to death and they'll be gone," McMaster said. "And the same thing will happen to people. So you have to be careful about that."

In the state's historic city of Charleston, the winter storm shuttered carriage-horse tour companies after a horse slipped and fell on ice during a tour on Tuesday, city spokesman Jack O'Toole said.

The storm was starting to snarl air travel in the southern United States, with about 50 percent of flights canceled at airports in South Carolina's Charleston and Myrtle Beach and Savannah, Georgia, according to the FlightAware tracking service.

Two to 3 inches (5-8 cm) of snow were expected in northeastern Florida, coastal Georgia and South Carolina, weather service meteorologist Bob Oravec said. The weather service said its Tallahassee office had measured snow and sleet accumulation of 0.1 inch (2.5 mm) on its roof, the first snow in Florida's capital since 1989.

"Both rush hours will be affected," Walsh told a news conference. "Be patient. With the amount of snow we're getting here, we could be plowing your street and a half hour later it could look like we haven't been there."