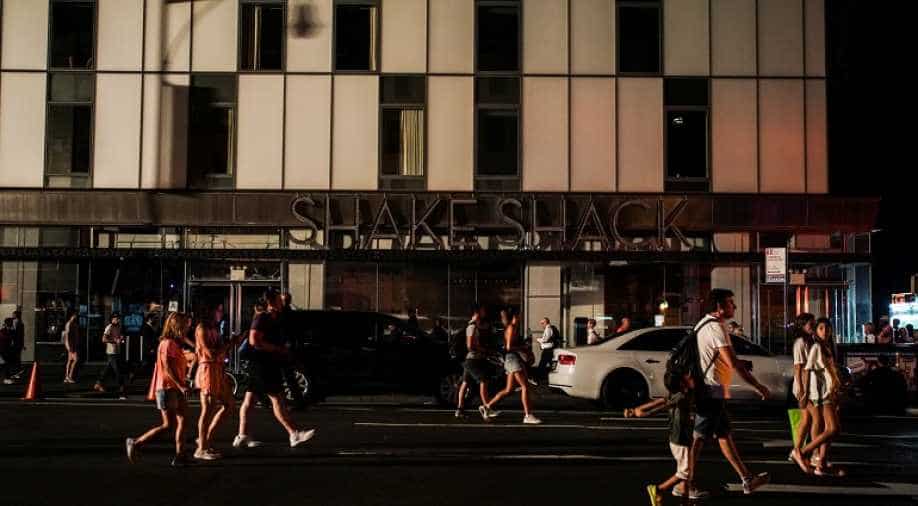 People walk along a dark street near Times Square area, as a blackout affects buildings and traffic during widespread power outages in the Manhattan borough of New York, U.S, July 13, 2019. Photograph:( Reuters )

Shouts of celebration could be heard in parts of Manhattan as power was restored, bringing lights and air conditioners back to life.

A wide swath of New York's Manhattan borough was plunged into darkness Saturday after a transformer explosion knocked out power to subways, stores and Broadway theatres, but the city's main utility said it had restored most power within hours.

No deaths or injuries were reported due to the blackout, which officials said began at 6:47 p.m. EDT (2247 GMT), and darkened a stretch of the city from West 42nd Street to West 72nd Street. The outage occurred 42 years to the day from a major 1970s blackout that sparked looting and rioting in the United States' most populous city.

By midnight, power had been restored to most of the customers who had lost it, said John McAvoy, chief executive of utility Con Edison. More than 73,000 homes and businesses lost power, officials said.

Shouts of celebration could be heard in parts of Manhattan as power was restored, bringing lights and air conditioners back to life.

The cause of the outage was unclear, McAvoy said, adding, "it does not appear related to excessive load."

A Reuters witness reported hearing an explosion on the Upper West Side around 7 p.m. (2300 GMT), and a city Fire Department spokesman said firefighters were on the scene of a transformer fire.

Sidewalks in Times Square that are usually crowded with tourists on a balmy summer Saturday night were overflowing as Broadway theatres cancelled performances. The lights of nearby Radio City Music Hall were dark.

In an attempt to cheer up customers, the cast of the musical "Come From Away" performed a song in front of the stage door. Other musicals' cast members also staged street-side performances.

With traffic lights out, cars and taxis jammed intersections as emergency vehicles and fire engines with sirens blaring tried to pass. In some places, civilians stepped in to direct traffic, including one who employed a toy lightsaber.

New York has endured large-scale blackouts before, most recently following Superstorm Sandy in 2012 as well as the widespread 2003 blackout across the U.S. Northeast that left most of the city without power for a day.

A New York blackout that crippled the city during a heatwave on July 13, 1977, sparked rioting and looting. Power was not restored until the next day.

Memories of the violence during the 1977 blackout spooked some tourists visiting the city, including Dave and Dara Campbell, of Gilbert, Arizona.

"People from home were texting us, asking, 'Are you OK?'" said Dara Campbell, 40.

As darkness fell just before 9 p.m. (0100 GMT), people on the Upper West Side had to use their mobile phone flashlights to negotiate normally brightly lit streets. There were reports of people trapped in building elevators without power.

Subways throughout the city were affected by the outage, with some lines skipping stations that lacked power and even lines in other boroughs diverted.

Mayor Bill de Blasio, who was in Iowa campaigning for the Democratic presidential nomination when the outage struck, told CNN said he had spoken with the police commissioner and the deputy commissioner responsible for counterterrorism.

"From what we're seeing at this moment, this is simply a mechanical problem," de Blasio said.

With some stations and traffic lights dark, many residents and visitors alike took to the streets and walked, according to social media posts, many of which had the hashtag #blackoutnyc.

Emerging from a subway station next to Central Park, Jeff O'Malley, a consultant who lives in Manhattan, said he was stuck in a subway car for more than an hour.

"We were stuck for about 75 minutes," said O'Malley, 57. "It's completely dark. People had to use the flashlights on their phones to see their way out."