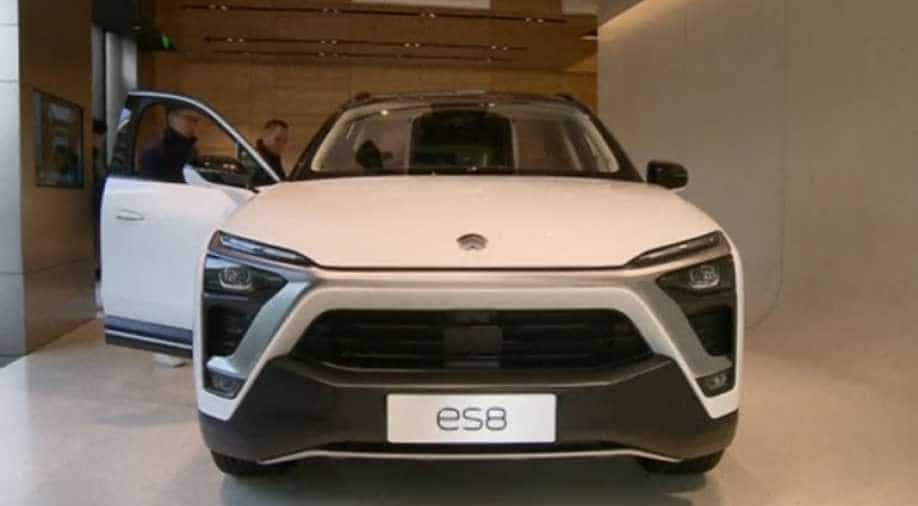 People check out the NIO ES8 at a garage in Shanghai. Photograph:( Reuters )

According to the company which is considered by some to be "China's Tesla," the seven-seater NIO ES8 can accelerate from 0 to 100 kilometers per hour in just 4.4 seconds, compared with the 4.9 seconds of Tesla's Model X.

A standard version of the ES8 is priced at 448,000 yuan, compared to the 836,000 yuan price tag of the Tesla. NIO also enjoys the advantage of Beijing's state subsidies for electric vehicles, which can drive the price for the purchaser down to as low as 370,000 yuan.

While Tesla has sold cars in China for several years, the company isn't eligible for these subsidies because its products are imported. To get around these restrictions, the California carmaker was recently reported to have reached an agreement to build a factory in China. Other foreign automakers have also formed partnerships with existing Chinese manufacturers in order to tap into the large electric vehicle market.

But staff at NIO remain confident about their competitive position.

"People tend to compare the NIO with other brands in physical terms. But in fact the car itself is only a very small part of an integrated system comprising the software system, the cloud, the Internet and consumer service. What makes NIO special is that it's an Internet product, we are designing a whole system based around consumer satisfaction. The products may seem similar to our rivals', but our business model is brand new," said Zhu Jiang, vice president of the user development department at NIO.

The company rolled out its first model on December 16 and with it came a driver-assistance system featuring a highway pilot, a traffic jam pilot and an automatic emergency braking system.

The car also features an artificial intelligence system called NOMI that regulates the temperature, plays music based on voice requests and can even take photos.

But the greatest chatter has been around the company's plans to establish swap stations that will install fully charged batteries in just three minutes. It also promises "Power Mobile" service vehicles that can travel to stranded drivers and recharge them beside the road.

Zhu said the changes NIO are going to bring to the market will be as dramatic as comparing an Apple to a conventional mobile phone. However, experts still believe it remains questionable to just what extent NIO can make these plans a reality.

"I think there's a question mark as to whether NIO can realize these plans in four or five years. There are three major issues. Firstly, I think there are still some gaps in terms of the technologies. Secondly, can it bring off a commercially viable mass production with low costs? The car is now priced between 400,000 and 500,000 yuan, and adding all these intelligent features to a seven-seater electric car will be difficult," said Zeng Liping, manager of NE Times.

Founded in 2014, NIO has just completed a one billion US dollar funding round led by Chinese tech giant Tencent. Zhu also denied media reports that NIO is considering a US IPO next year and says that thanks to its over 50 investors, NIO will be able to continue developing on its own for another year or two.