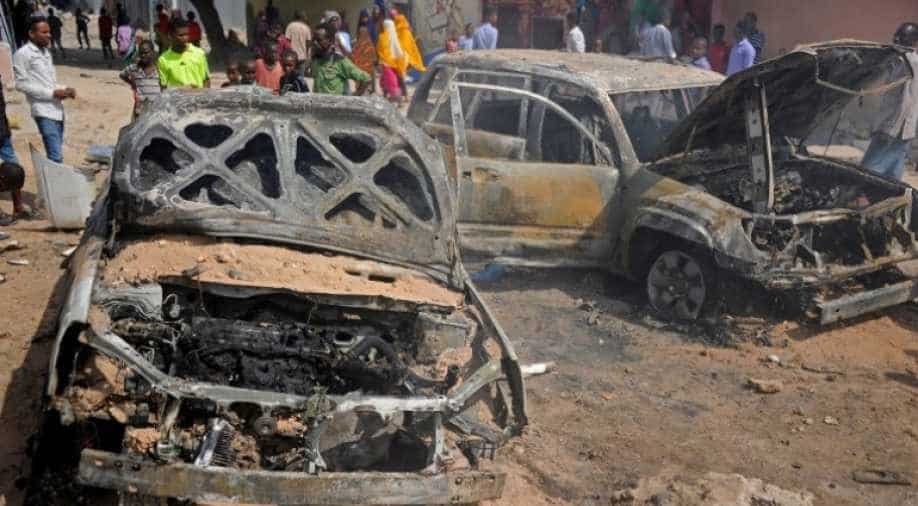 People gather around the wreckage of two burnt cars in the street, after a car bomb blast in Mogadishu, Somalia. Photograph:( AFP )

Four strikes on Saturday killed 34 militants and another two on Sunday killed 28, the US Africa Command said in a statement.

The US military said Monday it has killed 62 terrorists from the jihadist Shabaab movement in six air strikes in Somalia.

Four strikes on Saturday killed 34 terrorists and another two on Sunday killed 28, the US Africa Command said in a statement.

The air attacks, in a coastal region south of Somalia's capital, Mogadishu, were the deadliest in the country since November last year when the US said it had killed 100 militants.

The strikes were conducted with "our Somali partners to prevent terrorists from using remote areas as safe havens to plot, direct, inspire and recruit for future attacks," Pentagon spokesman Colonel Rob Manning said, noting that no civilians had been killed or injured.

The action brings to 45 the number of strikes the Pentagon has conducted against Shabaab so far in 2018, Manning said.

The surge in US operations in Somalia came after President Donald Trump in March 2017 loosened the constraints on the US military to take actions against alleged terrorists when they judge it is needed, without seeking specific White House approval.

American forces are partnering with African Union Mission to Somalia (AMISOM) and Somali national security forces in counterterrorism operations, and have conducted frequent raids and drone strikes on Shabaab training camps throughout Somalia.

As of August, the Pentagon assesses there to be between 3,000 and 7,000 Shabaab fighters and 70 to 250 Islamic State Somalia fighters in the Horn of Africa nation.