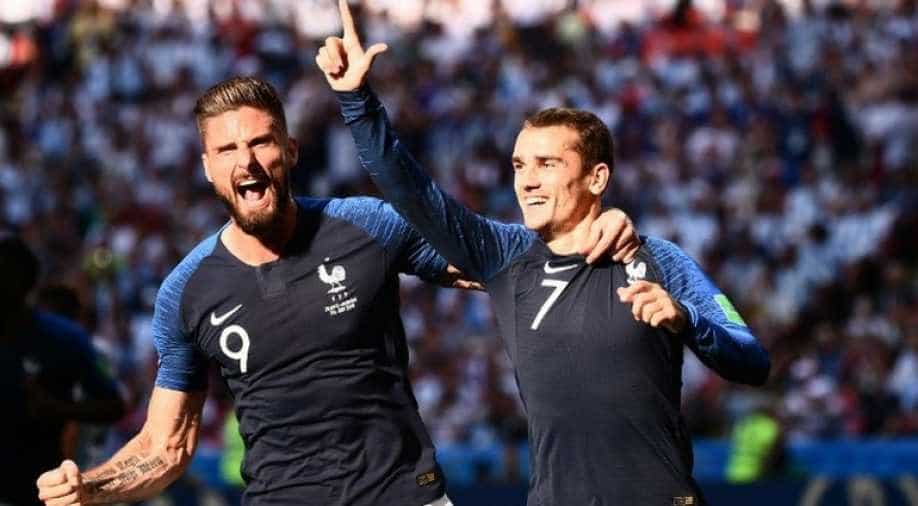 The 27-year-old forward cancelled out Toni Kroos' first-half penalty with a fine header just past the hour and then scored with a spot-kick himself late in the game to kill off the visitors' hopes of reaching the semi-finals.

World champions France fought back from a goal down to edge Germany 2-1 with a double from Antoine Griezmann in their Nations Cup match at the Stade de France on Tuesday.

The 27-year-old forward cancelled out Toni Kroos' first-half penalty with a fine header just past the hour and then scored with a spot-kick himself late in the game to kill off the visitors' hopes of reaching the semi-finals.

The French found themselves on the backfoot in the first half but did not lose confidence even when the Germans came close to a second goal.

"This is the difference between a team with a lot of confidence and a team like Germany which lacks some confidence and is maybe not as efficient," France coach Didier Deschamps told reporters.

"There is nothing better for my team, my players, than this. The best vitamin is victory and tonight we had a difficult game and won against a difficult team."

France top the League A Group 1 standings with seven points from three games above the Netherlands on three from two and Germany with one.

The Germans, with five changes to the team that lost 3-0 away to the Netherlands on Saturday, had their share of chances and overall looked sharper despite their sixth defeat of 2018.

"We should not be disappointed tonight after such a performance," said Loew, who has been under pressure since his side's World Cup flop in June.

"We were on the same level with the world champions and we should have scored a second goal in the first half. But the French have a lot of quality and scored two goals from just a handful of chances."

After crashing out at the group stage in the World Cup in Russia, Germany, world champions in 2014, are still looking for their first victory in UEFA's the Nations League competition.