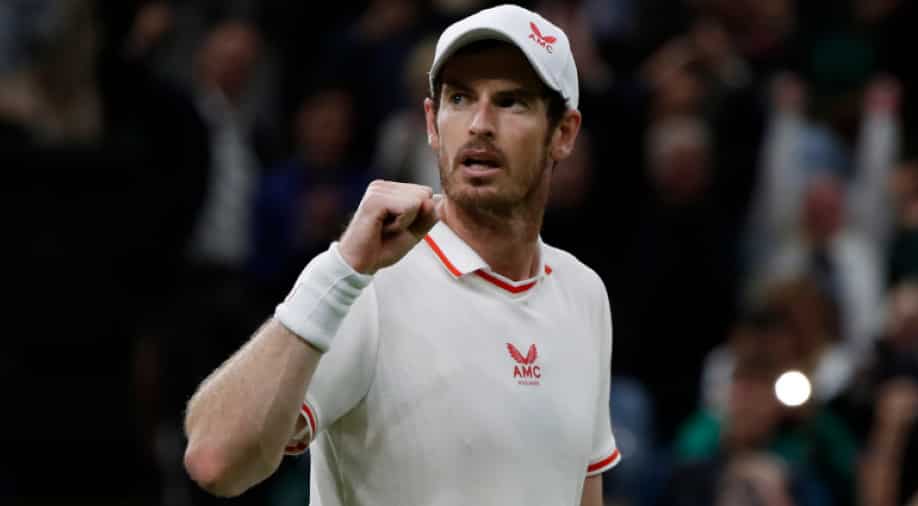 Back on the hallowed Centre Court turf on which he made himself a British sporting icon, the 34-year-old delighted his fans as he rolled back the years, producing vintage shot-making to lead by two sets and 5-0 in the third.

But in a bizarre twist, he lost seven successive games to send the match into a fourth set.

An interruption while the Centre Court roof slid into place appeared to help settle Murray's nerves and he got the job done to set up a second-round against Frenchman Arthur Rinderknech or Germany's Oscar Otte -- both qualifiers.

"I did well to win the fourth set in the end because that was mentally not easy going to the locker room after losing that third," Murray, who received a thunderous ovation at the conclusion from the 7,500 crowd, said on court.

"It was just disappointing to lose the third set. I had to remember what I was doing to get into a winning position. I think I served better in the fourth and turned it around."

Murray, the 2013 and 2016 champion, had not played a singles match at Wimbledon since he hobbled to a quarter-final defeat against American Sam Querrey in 2017.

That loss was the beginning of a dark chapter in Murray's career as he underwent hip surgery in 2018 and 2019.

The journey back has been a tortuous one and after missing the Australian Open because of a positive COVID-19 test and then suffering niggling injuries he arrived at Wimbledon with only five Tour-level matches under his belt this year.

He was roared on to the court for the early-evening clash and responded in style to edge a tight opening set when he broke the Basilashvili serve in the 10th game.

The powerful Basilashvili stretched Murray in the second set but after squandering breakpoints at 2-2 and 3-3 he lost heart as Murray began to cruise towards the finish line.

But Wimbledon would not be Wimbledon without some first-day drama and the match took a bizarre turn as Murray suddenly got tight as his lead began to shrink.

When Basilashvili saved two match points at 3-5, Murray began to resemble a man with his arm encased in concrete.

Tension filled the air with Murray's game beginning to unravel and Basilashvili claimed the third set after an exchange of volleys.

Basilashvili recovered from two sets down to beat Britain's James Ward in the first round in 2019 and with nagging doubts about Murray's physical condition, a repeat looked possible.

But Murray had a shower during the interruption for the roof closure and if he broke his opponent's serve to love twice to regain control.

Basilashvili dug deep to stay in touch and the Georgian had a breakpoint to get back to 4-4, only for Murray to stave off the danger with an exquisite drop shot.

Basilashvili saved a third match point with a backhand winner but at the fourth time of asking Murray sealed victory when his opponent sent a backhand into the net.