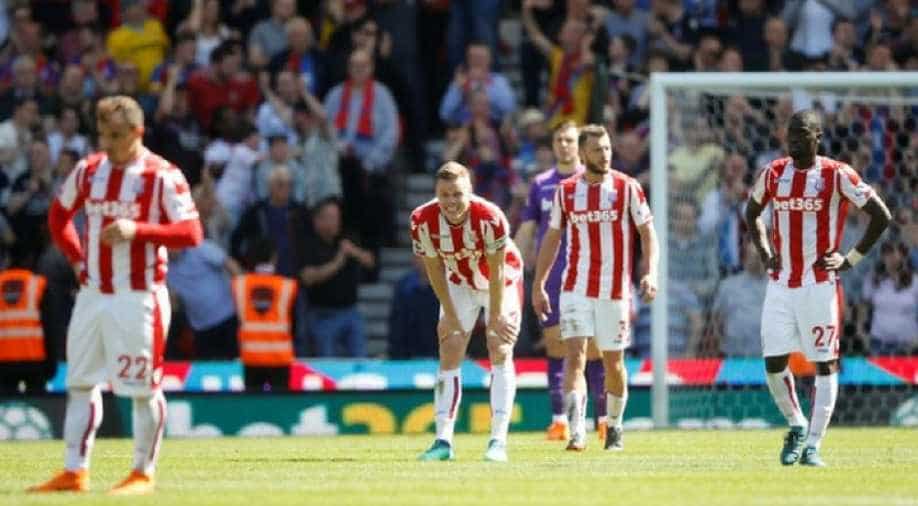 Stoke City were relegated from the Premier League on Saturday after their dismal season culminated in them giving up a first-half lead against Crystal Palace before succumbing to a deserved 2-1 defeat.

The Potters had to win to give themselves the faintest hope of maintaining their 10-year stay in the top tier of the English game but Paul Lambert's ailing side, who have not won in 13 league matches, went down to a late Patrick van Aanholt goal.

Xherdan Shaqiri had given Stoke hope with a deflected 43rd- minute free kick, only for James McArthur to equalise midway through the second half after a slick counter-attack.

Then, as Palace piled on the pressure, Van Aanholt struck four minutes from time as Stoke's worst run in the top flight for 34 years sealed their fate while Roy Hodgson's resurgent Palace could celebrate another year of Premier League football.

A crestfallen Ryan Shawcross, Stoke's captain whose late mistake led to Van Aanholt's goal, admitted his team had not been good enough all season.

"We've had a right go every single game (under Lambert) but for whatever reason, we haven't got the goals we needed and ultimately it's cost us," he told Sky Sports.

"It's difficult to take but it's a great club this and we'll be back."

With Palace not at their sharpest in a nervy opening half, it took the quality of Shaqiri to break the deadlock as he began a promising move with a fine cross-field ball, then tempted Ruben Loftus-Cheek into a clumsy challenge 23 metres out.

The Swiss international's curled free-kick took a slight diversion off Loftus-Cheek in the Palace wall to give Stoke a lifeline.

Yet the home side increasingly retreated as Palace began to swarm over them after the interval, with McArthur, overlapping on the left, slotting home an excellent left-footed finish after the visitors broke from deep in their own half.

A draw would not realistically have been enough to save Stoke but their fate was sealed when Shawcross, trying to clear his lines, diverted the ball straight into the path of the charging fullback Van Aanholt.

"The goal was my fault. Sometimes you make mistakes and they cost you," said Shawcross.

The win sealed Palace's safety, a remarkable achievement for former England manager Hodgson, who had to pull off a considerable feat of escapology after the Eagles' desperate start to the season under Frank de Boer.