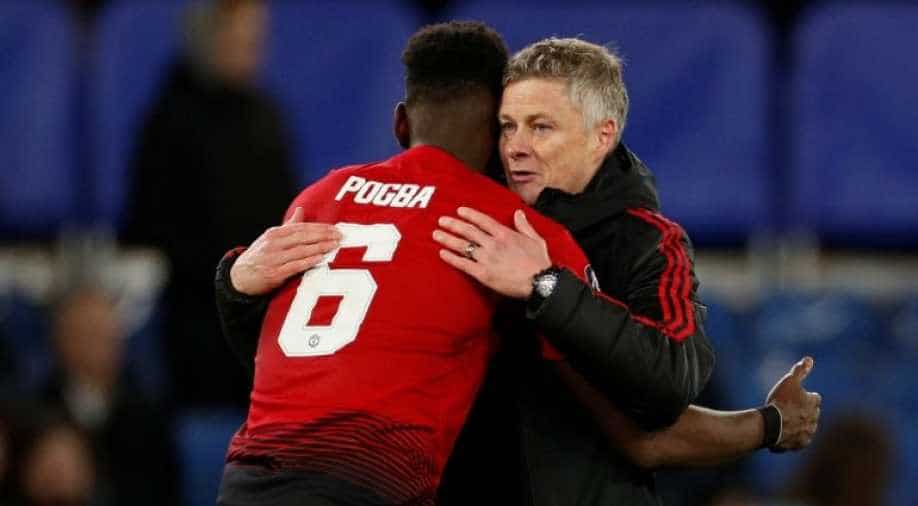 Pogba took over penalty duties from Marcus Rashford at Molineux, but his kick was saved by Rui Patricio, forcing United to settle for a 1-1 draw

Ole Gunnar Solskjaer expects Manchester United fans to rally around Paul Pogba after he suffered racist abuse on social media in the wake of his penalty miss against Wolves.

United supporters have promised to show their backing for Pogba when the France midfielder returns to Old Trafford for the Premier League meeting with Crystal Palace on Saturday.

Pogba took over penalty duties from Marcus Rashford at Molineux, but his kick was saved by Rui Patricio, forcing United to settle for a 1-1 draw.

Solskjaer added his voice to the clamour for social media companies to clamp down on racist outbursts but the United manager knows, despite some controversial moments off the field in his time with the club, Pogba is beloved by his own supporters.

"I expect it to happen, we can all see Paul was disappointed when he missed the penalty. He doesn't deserve this," Solskjaer told reporters.

"When you sign for Man United you become a Manc. Once a Manc, always a Manc. He gives his absolute everything for the club every week.

"I know people expect him to do absolutely everything on a football pitch.

"He's got so many qualities. We're seeing different qualities from Paul this year compared to last season and he's a leader in the group. I expect the fans to be behind him."

Those qualities have been evident in bursts during Pogba's time with United, although the World Cup winner has not always hit the dizzy heights of which he is capable.

Solskjaer believes a lot is expected of the midfielder, sometimes unreasonably.

"He expects a lot from himself as well," he said.

"We expect a lot from him but we know that we can't get Roy Keane, Veron, Scholes, Giggs and Cantona in one player. It's hard. He's a top, top player.

"We do expect a lot from our players and we have high hopes this season. Hopefully we can be consistent and challenge when we come to April and May and Paul plays a big part in that."

United have sought talks with Twitter chiefs in response to the threats and racist insults and, while Solskjaer believes Pogba will respond positively to the affair, he pointed out there is a limit to such resilience.

"You become thick-skinned playing football and being high profile, as our players are," he said.

"Apart from using common sense, sometimes you've just got to turn a blind eye to it. We know that these people are not the majority, it's a few select ones who hide behind a mask.

"When I spoke to Paul I didn't get the feeling that he struggled with it. He'd not been sat down reading a lot.

"Some, and I think Paul is one of them, get stronger from criticism. I enjoyed criticism but when it gets personal and when it gets to race then it's a different thing. There's a certain point, a limit."

The Pogba incident has brought the issue of racism in football back to the fore and the United manager confessed the sport had perhaps been complacent in believing the problem had been eradicated.

Solskjaer has also tipped 18-year-old midfielder James Garner and winger Angel Gomes, also 18, to be the latest youngsters to break into the United first-team squad.

"When we get to September and October, the midweek games and cup competitions, we'll see Jimmy (Garner), definitely," he said.

"He's done really well in the reserves. And Angel, definitely more of him."