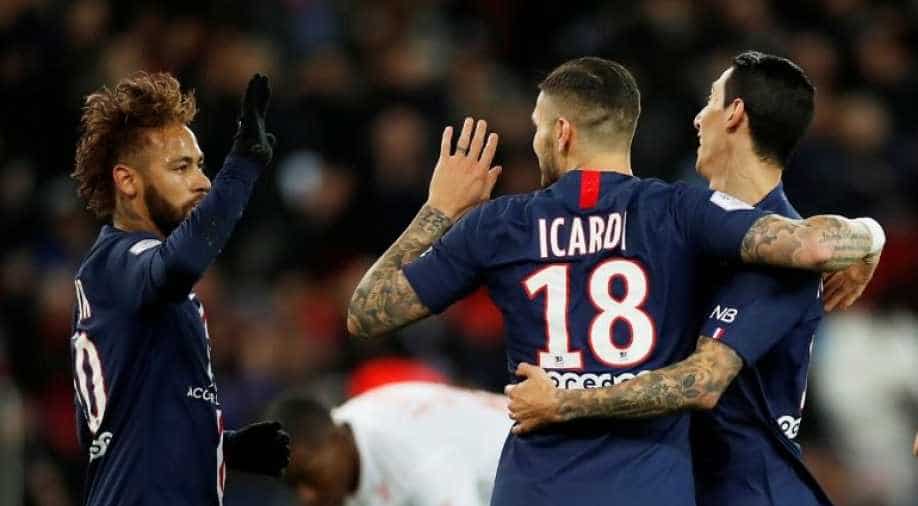 After just 14 games, PSG are 11 points clear of second-placed Marseille, who play on Sunday.

Neymar made his latest comeback from injury for Paris Saint-Germain on Friday as first-half goals by Mauro Icardi and Angel Di Maria saw the Ligue 1 leaders ease to a 2-0 win over Lille at the Parc des Princes.

The in-form Icardi opened the scoring from close range in the 17th minute with his 10th goal in PSG's last nine games, and Di Maria doubled their lead just after the half-hour mark.

Despite not being near their best, Thomas Tuchel's side were too strong for the team who finished runners-up behind them last season.

After just 14 games, PSG are 11 points clear of second-placed Marseille, who play on Sunday.

Neymar had not played for his club since October 5, having suffered a hamstring injury playing for Brazil against Nigeria a week later.

It was just the latest spell on the sidelines for the world's most expensive player, who has featured in barely half of PSG's matches since signing from Barcelona in 2017.

His decision to fly to Madrid to take in the Davis Cup tennis this week did not go down well with Tuchel, but the German coach still handed Neymar a start here.

On just his sixth appearance of the campaign, Neymar lasted 65 minutes before being replaced by Kylian Mbappe, who had been struggling with illness in recent days.

"I didn't expect too much from him because he has been out for six weeks. He lacked precision and his usual sense of timing but that is how it is," said Tuchel of Neymar.

The Brazilian only produced brief glimpses of his class and headed straight to the dressing room after being taken off, with some supporters jeering the 27-year-old as he departed.

"It's normal, lots of players do that," insisted Tuchel, dismissing any controversy.

"Others go to the bench, but I didn't see it because I was focused on making changes on the field. There is no need to make a big thing about it."

The main reason for Neymar's withdrawal, however, will have been to keep him fresh for next Tuesday's trip to Real Madrid when he will hope to make his first Champions League appearance this season.

Lille had beaten PSG 5-1 when the sides last met in April, but they came here on a run of just one win in nine and without an away victory since March.

They were without their top scorer, Nigerian striker Victor Osimhen, due to suspension, and coach Christophe Galtier had been left reeling when two of his assistants, Portuguese duo Joao Sacramento and Nuno Santos, left 48 hours before this game to team up with Jose Mourinho at Tottenham Hotspur.

They still almost took a second-minute lead through Xeka, but the midfielder's shot was saved by Keylor Navas.

Instead it was PSG who went in front from their first chance, Icardi converting at the far post after Jose Fonte had failed to cut out Idrissa Gueye's low centre.

Mike Maignan saved well from Gueye before the home side scored again in the 31st minute through another of their Argentine contingent.

Both Di Maria and Icardi had scored in PSG's last game, a 2-1 win at Brest, and both were fresh here having not featured in the Argentina squad for their friendly matches against Brazil and Uruguay.

On form they surely deserve to be playing for their country, however.

Di Maria controlled Julian Draxler's pass and beat Maignan to make it 2-0. That was the end of the scoring, although Draxler and substitute Edinson Cavani both squandered excellent second-half chances.

"They didn't play for Argentina and that was good for us because it meant we were able to manage their workload and keep them fresh," Tuchel said of his two goal-scorers.

"I'm delighted because they got their goals and worked hard for the team."