'It's all my fault and it's killing me,' says David Warner's wife Candice 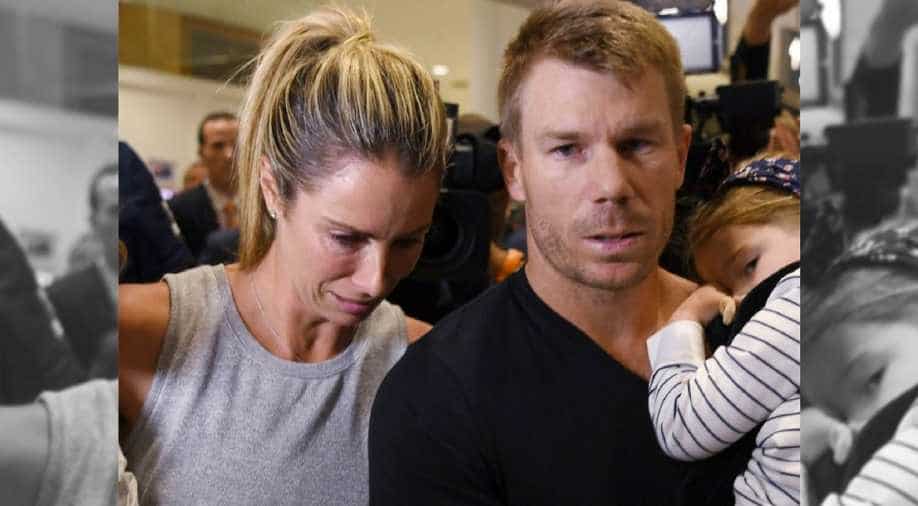 Disgraced Australia former vice-captain David Warner's wife Candice said Sunday she blamed herself for his part in the ball-tampering scandal, adding that the taunts they faced in South Africa took a huge toll.

Opening batsman Warner was banned for one year from domestic and international cricket over the plot to change the condition of the ball on the third day of the third Test against South Africa eight days ago.

In a tearful press conference in Sydney Saturday, the 31-year-old spoke of his fear that he would never get to represent Australia again as his wife watched on.

"I feel like it's all my fault and it's killing me -- it's absolutely killing me," Candice Warner told Sydney's Sunday Telegraph.

The Test series was already fractious before the ball-tampering affair, with a row between David Warner and Quinton de Kock during the first Test which the Australian said was sparked when the South African insulted his wife.

Two senior Cricket South Africa officials were also photographed with three spectators wearing All Black rugby player Sonny Bill Williams face masks during the second Test in reference to a reported intimate encounter Candice Warner had with him in 2007 before she met Warner.

Candice Warner said she was not making excuses for her husband's behaviour over the scandal but added that he was "protecting me as much as he could and protecting the girls (their children)".

"But Dave would come home from the game and see me in tears in the bedroom, and the girls just looking at their mum, it's been heartbreaking," she said.

"When we were in Cape Town and Port Elizabeth, Dave would come home and, yes, I always put on a strong front and I turn out to the games.

"But seeing them wearing the masks, to have people staring and pointing and laughing at me, to have the signs, to have, you know, the songs made up about me, I would have to sit there and cop that."

Candice Warner also called for sympathy and patience from Australian fans,&nbspsaying the batsman was struggling to cope with the fallout.

Warner evaded questions during the press conference about whether the ball-tampering plan was his idea, whether it was the first time, who else was aware of it and whether he had been made a scapegoat.

He has appeared isolated after being charged by Cricket Australia with developing the plot and telling Cameron Bancroft -- who was suspended for nine months -- to carry it out.

"I'm sure there were things he wanted to say but he just couldn't get it out. He is hurting. He is seriously, seriously struggling and he's not in a great headspace," she said.