'I owe a debt of gratitude to Jose Mourinho': Chelsea's Cesc Fabregas 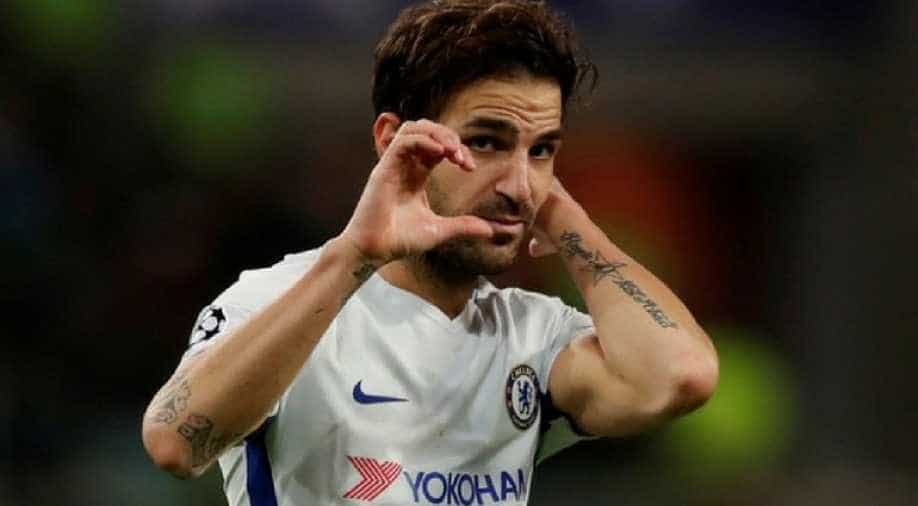 The Spanish midfielder will hope to ruin Mourinho's day in Saturday's FA Cup final against Manchester United and salvage something from a disappointing campaign.

But win or lose, Fabregas says he is full of admiration for the man who signed him for Chelsea in 2014, during Mourinho's second spell in charge at Stamford Bridge.

After three years at boyhood club Barcelona, following a move from Arsenal where Fabregas spent almost a decade, the 31-year-old proved a pivotal figure as Chelsea claimed the 2014-15 title, providing a league-leading 18 goal assists.

"I love him. I always say that. I owe him a lot because he brought me here, I will always remember that" Fabregas told reporters at Chelsea's training ground this week.

"My first year here, (former Arsenal manager) Arsene (Wenger) had always treated me like a son. But the closest anyone has been to him was Jose.

"The way he treated me, the way he made me feel, how he let me be a leader of the team from day one. This was fantastic and in all the four years since I joined Chelsea now, they will always stay with me.

"This experience is thanks to him."

Yet Fabregas has spent a large part of his career in opposition to Mourinho -- as he will do again at Wembley on Saturday when Chelsea hope to make up for finishing fifth in the Premier League with a first FA Cup win since 2012.

The early years of Fabregas's stint at Arsenal coincided with Mourinho's arrival as manager of Chelsea, while he was also part of a Barcelona side that was vying for Spanish supremacy with Mourinho's Real Madrid.

"We have our history between us," Fabregas said. "I played for Arsenal and him at Chelsea. Barcelona with him Real Madrid. We were confronting each other, but then we humbled ourselves and started a good relationship.

"This is very nice but hopefully it will not be his day (on Saturday) and Chelsea can win."

Apart from Fabregas, several other players from the 2014-15 title-winning team including Gary Cahill, Willian and Eden Hazard will be involved on Saturday.

While they will all be familiar with Mourinho's methods, Fabregas knows their old manager will conjure something new for a one-off game that means so much to both teams.

"In the last two years we played many games against them and he has changed the system many times," Fabregas said.

"I am sure he will change something again on Saturday. You can expect that. We just need to prepare our game and focus on ourselves. We don't need to be thinking too much about what they are going to do and we have to do what we do."

United finished runners-up in the Premier League and are favourites against a Chelsea side who ended the league season with a 3-0 defeat by Newcastle United.

Fabregas said last season's final when Chelsea lost to Arsenal after winning the Premier League title showed why the Wembley showpiece is so hard to call.

"Anything can happen really," he said. "Last year everyone was saying Chelsea will win it and we played one of our worst games of last season. Mourinho prepares finals very well and I am sure Antonio (Conte) will do the same."