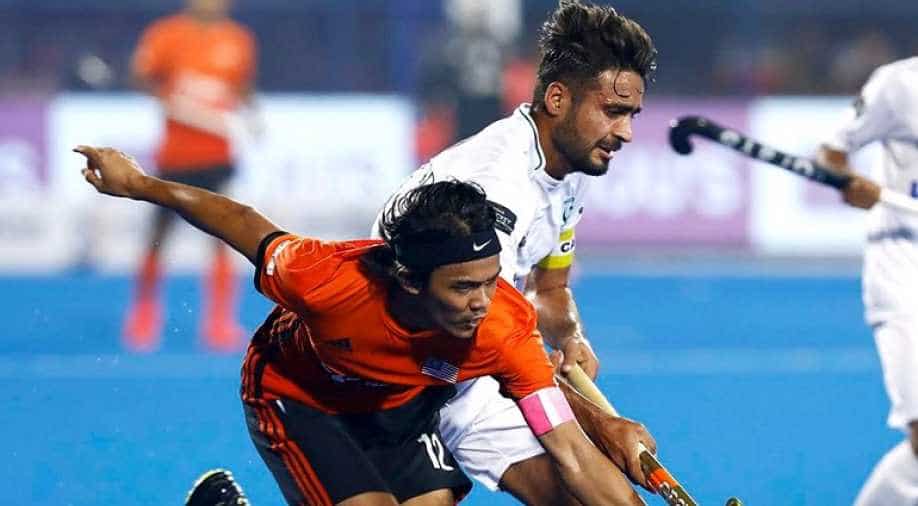 Hockey players of Pakistan and Malaysia in action during a pool game. Photograph:( Twitter )

Malaysia gave a stiff challenge to Pakistan and did not allow the opposition to score easily despite giving many penalty corners.

Malaysia held four-time world champions Pakistan to a 1-1 draw in a pool game of the ongoing Men's Hockey World Cup 2018 in Bhubaneswar.

The game was crucial for both the teams to enhance their chances to get a place in cross-overs and the winner of today’s match would have finished in top 3 but the virtue of this draw, Pool D remains quite open.

Malaysia gave a stiff challenge to Pakistan and did not allow the opposition to score easily despite giving many penalty corners.

Pakistan had many chances to score but all went in vain thanks to goalkeeper Kumar Subramaniam, who pulled off some stunning saves.

Both the teams went goalless in the first three quarters but took charge in the fourth. First Pakistan scored, a goal which could have been avoided, and minutes later Malaysia scored the equaliser.

After this game, both Pakistan and Malaysia stand with 1 point each while Germany tops the chart with 6 points and Netherlands occupies the second position with three points.