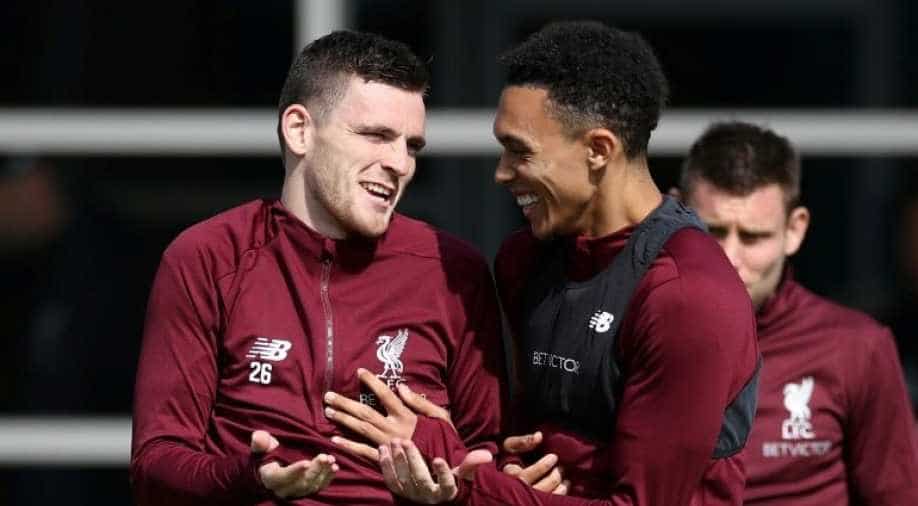 The Scotland captain posted a short video clip on Twitter of himself smiling wryly with the caption "Realising you have more assists than @trentaa98".

A day after Liverpool's Andy Robertson made his fourth assist of the Premier League season in Sunday's 3-1 victory over defending champions Manchester City, he issued a challenge to fellow full-back Trent Alexander-Arnold.

The Scotland captain posted a short video clip on Twitter of himself smiling wryly with the caption "Realising you have more assists than @trentaa98" to which his teammate responded, "Come back in May."

The healthy rivalry between the Merseyside club's marauding full-backs has seen them create chances on par with some of the best forwards in the world, adding venom to Liverpool's already potent attack as they chase a first league title in 30 years.

"Me and Trent had big numbers last season in terms of contributing to goals and stuff, but it was more than that," Robertson, 25, told Liverpool's website.

"Defensively we were also very good and this season we've tried to do the same. We just try and produce high standards in every single game ... it's not always possible."

Robertson and England's Alexander-Arnold have combined for 30 league assists,15 each, since August 2018 when Liverpool began to hit top gear under manager Juergen Klopp.

In the 12 games, the pair have started this season, Liverpool have conceded 10 goals with only second-placed Leicester City (eight) and Sheffield United (nine) letting in fewer.

Robertson hailed the remarkable progress of Liverpool-born Alexander-Arnold, who is not far behind him with three assists this season.

"Trent is 21 and he's producing performances unbelievably and hopefully he keeps that up," Robertson said.

"Hopefully the team keeps it up because we're doing well so far and there's confidence in that changing room."

"Some of Trent's passing is as good as a midfielder's. I've played with Steven Gerrard and Xabi Alonso and I'd put him right up there," Crouch told the BBC in his role as an analyst.

"With what they do for this Liverpool team, Robertson and Alexander-Arnold are redefining the way full backs play."