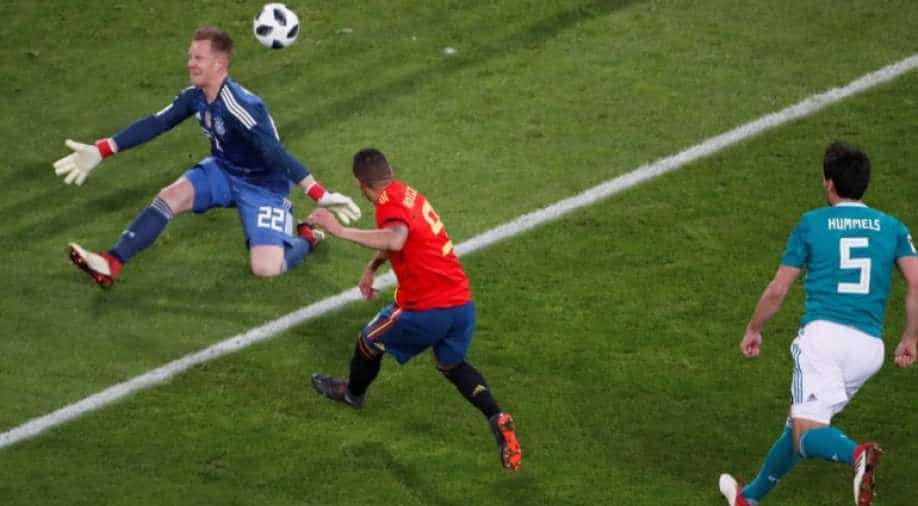 World champions Germany drew 1-1 with Spain in a high tempo friendly on Friday as they launched their preparations for a title defence in Russia while their opponents had striker Diego Costa making his long-awaited comeback as a substitute.

Germany's Thomas Mueller scored with a long-range strike in the 35th minute to cancel out Rodrigo Moreno's early opener.

The hosts were made to work hard against the Spaniards, who are unbeaten under coach Julen Lopetegui, but still managed to stretch their own unbeaten run to 22 matches, one shy of the German record of 23 dating back to 1978-80.

They can now match it when they take on five-times world champions Brazil on Tuesday when Spain, the 2010 World Cup winners, host Argentina in Madrid.

"I think it was a very good test for both teams because both teams combine well when they have possession," said Germany coach Joachim Loew.

"Spain and us tried to increase the pressure, attack early, press early. It was a high intensity game and a good test to gain a lot of insight. We still have some room for improvement."

The visitors, with captain Sergio Ramos earning his 150th cap, went ahead when Rodrigo timed his run perfectly to pick up a superb through ball from Andres Iniesta and beat keeper Marc-Andre ter Stegen in the sixth minute.

The Germans, who at times struggled with their opponents' quick passing, managed to draw level with an unstoppable 20-metre strike from Mueller 10 minutes before the break.

Keepers David de Gea and Ter Stegen were kept busy after the break and Mats Hummels hit the crossbar with a looping header from a clever Toni Kroos free kick as both sides carved out good chances.

"We have a good feeling after this game against the best team in the world," said Lopetegui, whose own unbeaten run with Spain is now 17 games.

"We had chances to win the game. Germany are extremely fast and strong. We were fully motivated against the world champions."

Spain's Costa made his comeback as a substitute in the second half after the combative forward missed out on playing late last year when he was unable to feature for his club because of a FIFA transfer ban for signing minors.

Atletico completed a 57 million pound ($80.6 million) deal for Costa to rejoin them from Chelsea in September, but the move was delayed because the Liga club could not register new players due to the ban, which ended on Jan. 1.

His return is good news for Lopetegui's team, one of the title contenders at the World Cup in Russia starting in June.

The Germans have been drawn in Group F of the tournament, along with Mexico, South Korea and Sweden.

Spain are in Group B and will play Iran, Morocco and Portugal.