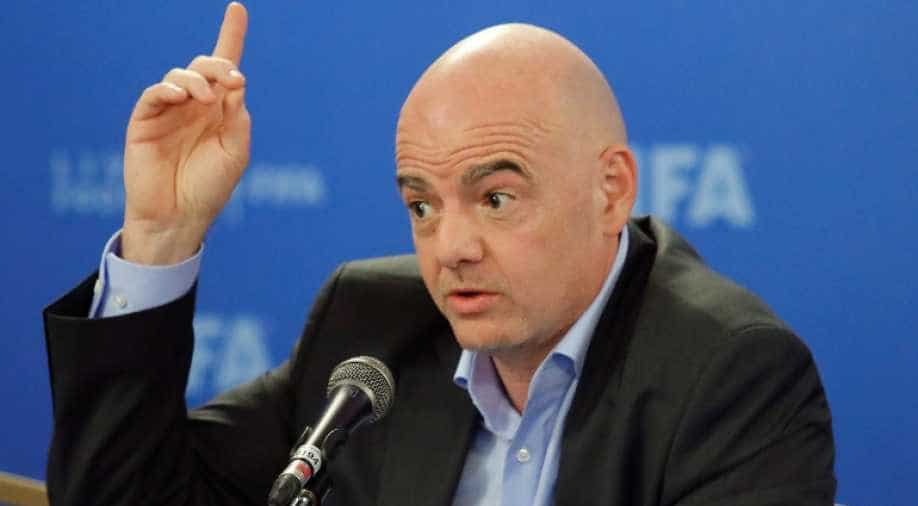 Chelsea were banned last week from signing anyone in the next two transfer windows after being found guilty of breaching FIFA’s rules relating to signing overseas players under the age of 18.

FIFA president Gianni Infantino said on Wednesday that football’s governing body will consider changing the rules over the transfer of minors after Premier League Chelsea were hit with a transfer ban.

Chelsea were banned last week from signing anyone in the next two transfer windows after being found guilty of breaching FIFA’s rules relating to signing overseas players under the age of 18.

FIFA's rules say players aged 18 or under can only be transferred abroad if one of three criteria are met: if their parents emigrated for non-footballing reasons, both clubs are in the EU or European Economic Area and the player is aged between 16 and 18 or the player lives within 100km of the new club.

Clubs like Barcelona, Real Madrid and Atletico Madrid have also received transfer bans in recent years after falling foul of the rules and Infantino, speaking at a news conference in Rome, said the regulations should be subjected to renewed scrutiny.

“There are rules, regulations, whether we like them or not they have to be respected as long as they are there,” he said.

“Otherwise if we don’t like them we need to change them... Maybe we should raise the minimum age all over Europe, or we should allow certain exceptions based on certain clear criteria, for young boys or girls to be able to have good training conditions in other parts, but protecting the minors.

“This is our main priority so it is certainly an area that we have to look into and continue looking into in the future as well."

Infantino, who was elected in February 2016, also said that FIFA intends to review regulations over the activity of football agents.

“We are planning to revisit the regulations governing agents because we feel it’s necessary to fine-tune those rules,” he said.

“Today the economic flow involved in transfers is about 8 billion euros ($9.10 billion) a year without considering the money paid to the footballers.

“So I think it would only be fair for those involved in these transfers to be regulated, their profession clearly needs to be governed. All other professions are governed and disciplined in Italy and throughout the world so why not them?"

Infantino said agents were subjected to tighter rules in the United States.

“Look at what happens in the USA. Often the USA is taken as an example but the USA is the homeland of the free market of laissez-faire. Everything is open, people do whatever they want. But these professions are regulated in a very stringent way.

“You’ve got huge volumes and books that govern transfers and changes in clubs and agents. We’ve got these slim booklets here in Europe and in FIFA so we’ve got a bit of work to do.

“We are talking about this with everyone – with clubs, leagues, federations and football players and agents. Hopefully this year we’ll be able to propose measures to further regulate this activity to protect everyone: footballers, clubs and agents themselves.”