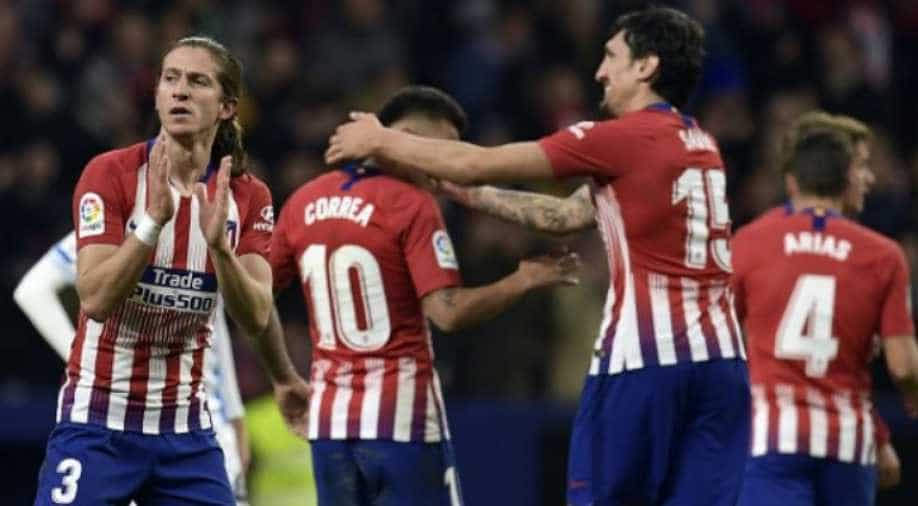 Atletico dominated after the restart and left-back Luis put the game to bed on the hour mark with a brilliant curling effort after cutting inside onto his less-favoured right foot.

Defenders Diego Godin and Filipe Luis scored as Atletico Madrid bounced back from their midweek thrashing by Borussia Dortmund with a 2-0 victory over Real Sociedad to move top of La Liga on Saturday ahead of the season's first Clasico.

Despite a stuttering start to the campaign, the poor form of both Barcelona and Real Madrid have allowed Diego Simeone's side to drag themselves to the summit after a seven-game unbeaten run in the league.

Wednesday's 4-0 thumping at Signal Iduna Park was the heaviest defeat of Simeone's seven years in charge, but Atletico put in a commanding display at the Wanda Metropolitano.

"I was convinced that they would respond in the best way," Simeone told Movistar. "Today was 90 minutes that showed good togetherness and creates enthusiasm and calmness."

The 2014 Spanish champions lead second-placed Barcelona by one point, with Real four further adrift, with the two giants to face off at the Camp Nou on Sunday.

After a frustrating first 44 minutes which saw Ruben Pardo twice go close for the visitors, Godin struck on the stroke of half-time, latching onto a loose ball to sweep home his first league goal since March 2017.

Atletico dominated after the restart and left-back Luis put the game to bed on the hour mark with a brilliant curling effort after cutting inside onto his less-favoured right foot.

Elsewhere, Valencia were held to their 10th draw of the season and fifth in a row with a goalless stalemate at Athletic Bilbao.

Marcelino's men, who finished fourth last term to qualify for the Champions League, are now just three points above the relegation zone despite having only lost one of their 10 top-flight matches so far.

Spain striker Iago Aspas scored a hat-trick as Celta Vigo thrashed Eibar 4-0 to move into the top half of the table, while Levante clinched a fourth successive league victory by beating Leganes 2-0.