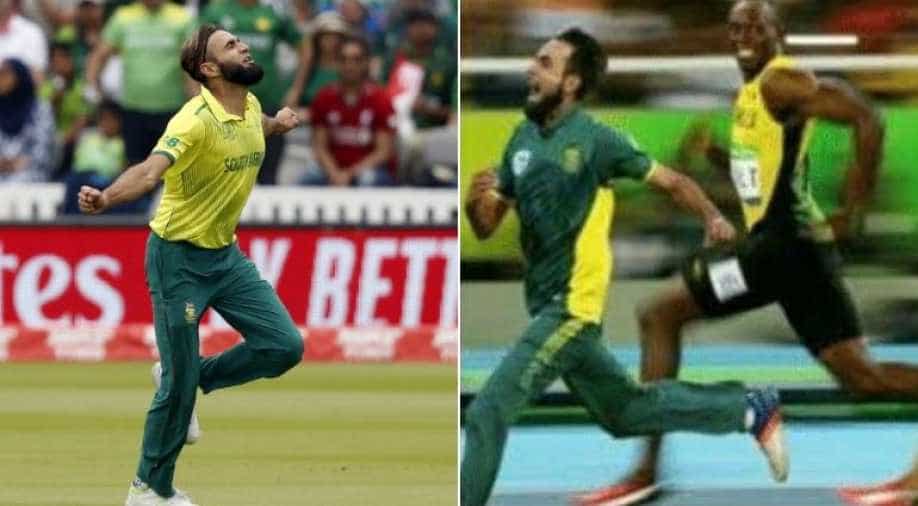 Imran Tahir took two wickets during a World Cup match between South Africa and Pakistan on Sunday at Lord's. He dismissed Imam-ul-Haq (44) and Fakhar Zaman (44) to become South Africa's all-time leading wicket-taker in the tournament.

He went past Allan Donald, who had 38 wickets to his name.

Tahir has a habit of running around the ground to celebrate every wicket he takes in any form of cricket.

Tahir's trademark celebration allowed meme experts to have a field day on Twitter.

Here are some of the hilarious reactions on Tahir's unique celebration.

One fan posted a photo of Tahir having a sprint alongside Usain Bolt and captioned the post as "Imran Tahir after taking the 2nd wicket. #PakvsSA #CWC19".

One user posted a series of photos and captioned the post as "Imran Tahir has reached Kashmir after taking a wicket."

One user posted, "Breaking: ICC ordered to close all exit doors at Lord`s stadium so Imran Tahir doesn`t run out of the stadium after taking a wicket."

"The nearest traffic officer must have stopped Tahir before reaching the nearest Expressway #CWC19 #PAKvSA," one fan tweeted.

One Twitter user posted photos of chicken and captioned the post as "Imran Tahir as a chicken."

After opting to bat first, Pakistan was able to score 308 runs in the allotted fifty overs, owing to Haris Sohail's knock of 89 runs.