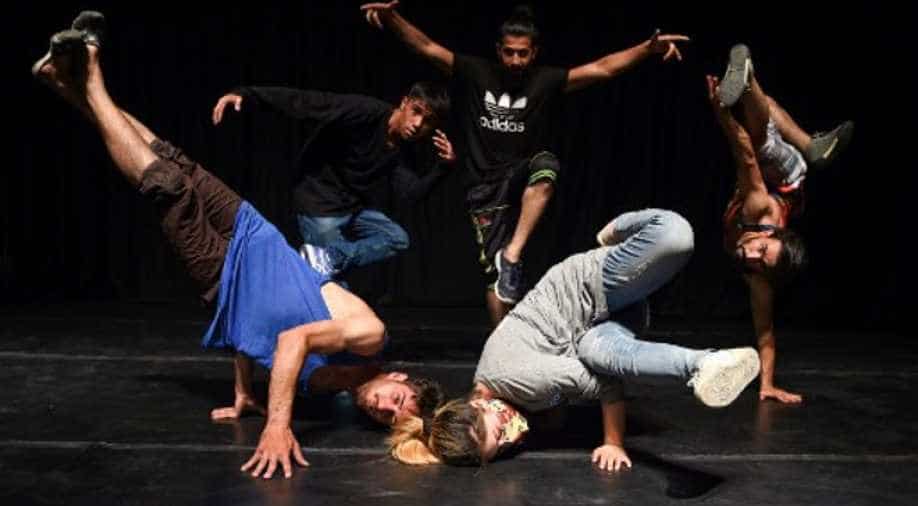 Afghan breakdancers pose for a photograph at the French Cultural Centre in Kabul. Photograph:( AFP )

At the French Cultural Centre in Kabul, the group takes turns practising the basics -- toprocking, headspins, and freezes, while watching YouTube videos on their phones of famous b-boys like Lilou and Hong Ten for inspiration

In the land of suicide bombings, burqas, and unending war, a group of Afghans have turned to breakdancing for stress relief and self-expression -- even as fears the Taliban could yet return to power fuel worries of a renewed crackdown on the arts.

At the French Cultural Centre in Kabul, the group takes turns practising the basics -- toprocking, headspins, and freezes, while watching YouTube videos on their phones of famous b-boys like Lilou and Hong Ten for inspiration.

"Breakdancing keeps us away from stress and war. It gives us freedom. It frees our minds from the stress of living in Kabul and we forget about the war and killings," explains Murtaza Lomani, 23, from the Top Step crew.

The cultural centre is one of the few places in the Afghan capital where the mixed-gender Top Step crew are able to practise and feel relatively safe, Lomani says. But even here there are risks.

Just five years ago, the centre was attacked by the Taliban as it hosted a play about suicide bombings, where Lomani was among the injured.

For Heja Aalia, who says she is one of just four female breakdancers in Kabul, there are other worries.

"If I train outdoors in our society, people insult you," says Aalia, adding that many young women are interested in breakdancing but are unable to get permission from their families to try it out.

"It's really difficult for a girl to practise breakdance, especially in Afghanistan where people think dance is against Islamic culture."

The sport first originated in New York's Bronx borough in the 1970s, where "breaking" along with rap music and graffiti art formed the pillars of hip hop culture that has gone on to dominate everything from pop music to fashion worldwide in the ensuing decades.

But while the rest of the world was quick to embrace that culture, decades of war and hardline Taliban rule in the 1990s prevented the phenomenon from taking root in Afghanistan.

"Afghan society has changed a bit in recent years, the generations have changed and people are thinking positively," says Lomani, who admits that many laughed at their dance moves when they first started in 2011.

"But we have convinced some youth and now it is really good that we practise," he adds.

"We learn our new moves from YouTube, and YouTube is our mentor because we do not have any trainer here to... teach us," he says.

However there are fears that it all may change soon.

After 18 years of war, the United States spent the last year locked in negotiations with the Taliban, seeking a deal that could see a gradual withdrawal of US-led forces from Afghanistan.

The deal was, temporarily at least, taken off the table after President Donald Trump declared the talks "dead" earlier this month.

Instead, Afghans are now gearing up for a presidential election set for Saturday, when incumbent Ashraf Ghani and main rival Abdullah Abdullah will be seeking a strong mandate to negotiate with the Taliban as they seek a lasting peace.

However Washington's desire to end its longest war has been made clear, and Afghans are still apprehensive that a hasty US exit -- with or without a deal -- might allow the long-feared Islamists, who have been resurgent on the battlefield in recent years, to regain some semblance of power in Kabul.

"If the Taliban come none of us can continue," says Aalia.

But despite those fears, and the backlash against female breakdancers, she has vowed to continue.

"One day if the Taliban comes, we can stop this publicly," she says.

"But we will practise breakdancing underground or secretly."