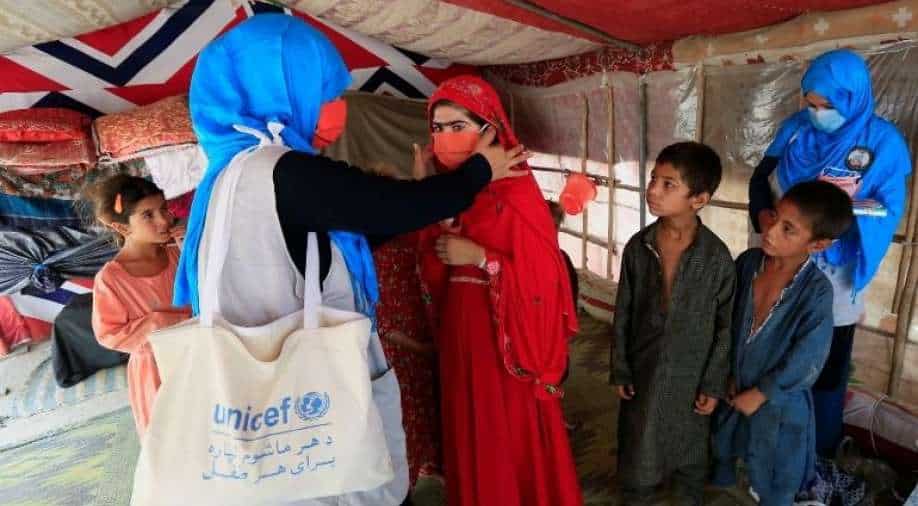 A UNICEF worker helps an internally displaced girl put on a face mask at a makeshift camp, amid the coronavirus disease (COVID-19) outbreak, in Jalalabad, Afghanistan Photograph:( Reuters )

Announcing the funding, an Afghan health official said the programme would cover the 20 per cent of the country's 38 million population

The Taliban militant movement gave its backing on Tuesday for a coronavirus vaccination campaign in Afghanistan that has received a $112 million pledge from the World Health Organization’s COVAX programme.

The immunisation drive will have to take place amid relentless violence in the country despite the government and the Taliban insurgents opening peace talks in September.

Taliban spokesman Zabihullah Mujahid told Reuters that the group would "support and facilitate" the vaccination drive conducted via health centres. Officials believe the insurgents would not target vaccine teams as they would not be going door-to-door.

Announcing the funding, an Afghan health official said the programme would cover the 20 per cent of the country's 38 million population.

Afghanistan's Deputy Health Minister Waheed Majroh told journalists it was going to take six months to get the vaccines but authorities were in discussions to get them earlier.

Afghanistan has registered 54,854 infections and 2,390 deaths - but experts say cases are significantly underreported due to low testing and limited access to medical facilities in the war-torn country.

Aside from COVAX, the country has also received a pledge of 500,000 doses of the AstraZeneca vaccine from India, Dr Ghulam Dastagir Nazari, head of the Expanded Programme on Immunisation at Afghanistan's health ministry, told Reuters.

"The AstraZeneca brand which is manufactured in India will arrive soon in Afghanistan," Nazari said, adding that the government was only concerned about the WHO approval of the vaccine and that the pre-qualification process has already started.

An Indian government source confirmed that 500,000 doses had been set aside for Afghanistan and another official said the first batch of vaccines would land in February, though Kabul had not yet adopted the protocols to administer them.

The World Bank and Asian Development Bank have also said they would finance vaccines for another 20 per cent of the population by the end of 2022, health ministry spokeswoman Masouma Jafari told Reuters.