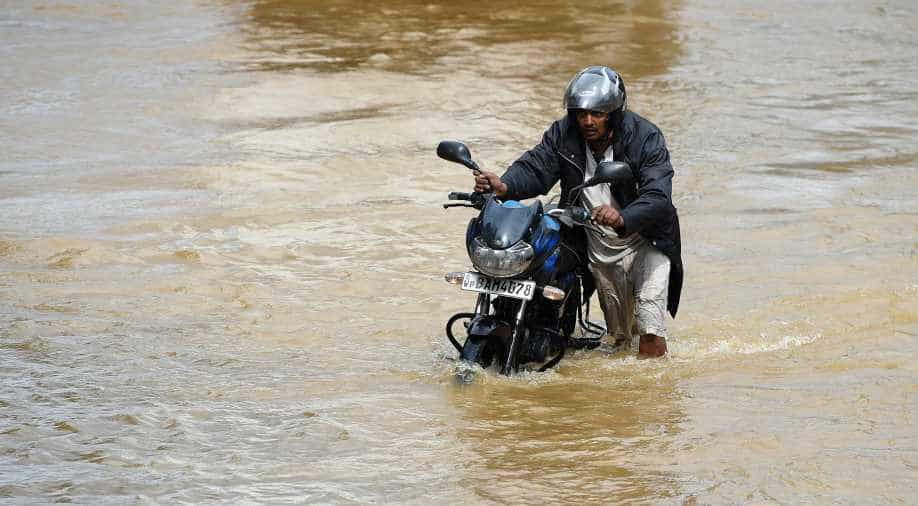 A Sri Lankan commuter pushes his motorbike through floodwaters on an expressway. Photograph:( AFP )

The death toll from flooding and landslides in Sri Lanka climbed to 100 while the number of missing since Friday's deluge had been revised down to 90 from 110, The official Disaster Management Centre (DMC) said Saturday.

Forty other people are in the hospital, AFP reported.

Authorities issued fresh evacuation orders for those living downstream of two major rivers, citing a risk of flooding even though the rains had subsided.

"The monsoon has firmly established and we could have evening showers at a lesser intensity", meteorological department chief SR Jayasekera said.

The flooding is the worst since May 2003 when 250 people were killed and 10,000 homes destroyed after a similarly powerful Southwest monsoon, officials said.

Nearly 500 homes were either damaged or destroyed due to flooding as well as landslides, DMC director of operations Rear Admiral A. A. P. Liyanage told AFP.

Most of the deaths were due to mountainsides collapsing on homes after heavy overnight rain, he said.

The DMC said the monsoon ended a prolonged drought that had threatened agriculture as well as hydropower generation.

The rains have filled reservoirs used for hydroelectric projects after low supplies had raised fears of power shortages in June.

But officials said most reservoirs were now so full they were in danger of spilling over and flooding communities living downstream.

By Friday evening over 60,000 people had been driven out of their homes while nearly 500 homes had been either damaged or destroyed.

Most of the deaths have occurred due to mountainsides collapsing on homes, authorities say.