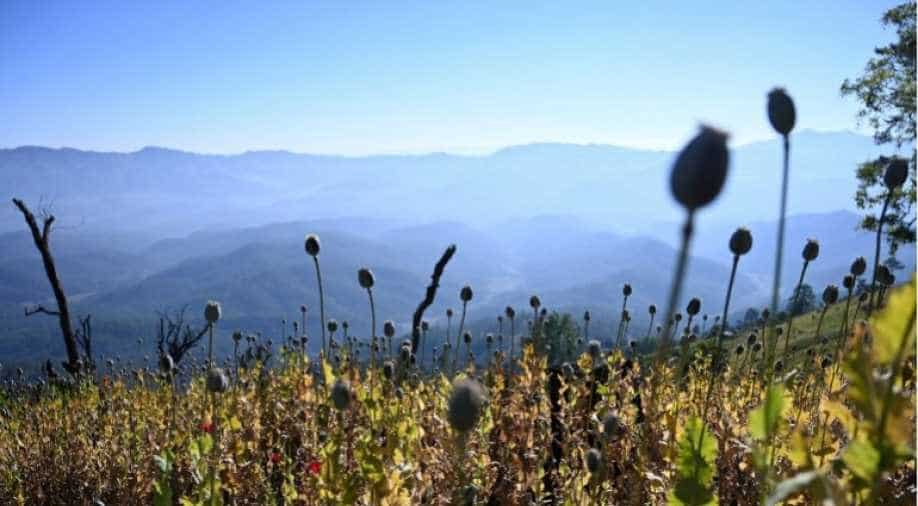 Shan is the epicentre of production in Myanmar, with a network of local armed groups linking up with transnational trafficking gangs.

Mobs of stick-wielding church-goers in Myanmar's northeast used to descend on dealers and addicts in a desperate effort to save their communities from a meth-induced health crisis sweeping the country.

But anonymous death threats brought the vigilante operations to a halt.

"It simply became too dangerous for us," says Zau Man, leader of the local Baptist church in Kutkai, a town in Shan State scarred by addiction.

Myanmar is the second-biggest producer of opium in the world after Afghanistan and is now believed to be the largest source of methamphetamine.

The multi-billion dollar industry outstrips rivals in Latin America to feed lucrative markets as far away as Sydney, Tokyo and Seoul.

Shan is the epicentre of production in Myanmar, with a network of local armed groups linking up with transnational trafficking gangs.

Kutkai sits between Mandalay and the militia-riddled town of Muse on the China border, a key entry point for precursor chemicals heading to Myanmar's illegal meth labs.

Trucks carrying illicit goods roar through the town in both directions, past a Chinese temple and streetside restaurants with signs in Mandarin.

Heroin and meth use here are rampant. Zau Man says nearly every household has at least one drug user, dealers work out in the open and often violent meth addicts have turned parts of Kutkai into no-go zones.

'Smart and ruthless'
Myanmar is facing a "public health disaster" because of meth and few villages in the country are left unscathed, Jeremy Douglas, a regional representative of the UN Office on Drugs and Crime, tells AFP.

But the crisis is at its most acute in the poppy-covered hills of Shan State, where a landscape overrun with armed rebel groups, militias and security forces is an ideal breeding ground for meth labs.

Accurate figures of production of high-quality crystal meth, or "ice", and low-grade meth, known in Southeast Asia as "yaba", are unavailable.

In January 2018, Kutkai police seized 30 million yaba pills, 1,750kg of crystal meth and 500kg of heroin with a domestic value of some $54 million in the country's largest-ever drug bust.

But huge raids leave street prices unaltered, suggesting they are only a small slice of production, according to the International Crisis Group, which says the business now "dwarfs" Shan's formal economy.

Crystal meth is smuggled via sophisticated trafficking networks to more developed markets like Australia, where it can fetch a wholesale value of more than $180 million per tonne.

Yaba is distributed to Myanmar's neighbours, particularly Thailand and Bangladesh.

But the pink pills are increasingly being dumped at rock-bottom prices on a domestic market in what Douglas called a "smart and ruthless" strategy to build demand.

"It's a nasty business and they're really pushing it out into the population," he says.

Users and health workers in three different towns in Shan state -- Lashio, Kutkai and Muse -- told AFP pills go for just 500 kyat for three, or around 10 cents each.

As the price falls, so does the user age, with reports of children as young as nine taking yaba.

Many miners, long-distance drivers and shift workers mix narcotics -- smoking meth to keep them awake, and injecting heroin to bring them down.

Ashamed to go home
Arr San, a gaunt 27-year-old with matted hair, rummages round his roadside shack in Muse and pulls out a bong crafted from a plastic bottle he uses to smoke yaba.

He has been hooked since he was 18 and now consumes around five pills a day.

For Arr San, like many others in the region, there are few opportunities to avoid the cycle of poverty and violence -- two years ago he fled his home in a nearby town for fear of being forced into an ethnic armed group.

Narcotics can provide an escape from the often grim reality of life in Shan.

"I take drugs because I get depressed and they help stabilise my mind," he says.

Arr San is one of 300 heading daily to the local hospital for methadone, a powerful opioid used to wean people off heroin.

But the problem is not limited to the poor.

Usually in powder or crystal form, "ice" is commonly snorted or smoked. It can also be injected, which increases the threat of disease transmission through needle-sharing.

A UNODC-backed policy launched in February 2018 champions depenalising users and treating drugs as a health issue while tackling the trade's kingpins.

But the law has yet to catch up —- anyone caught with even one yaba pill still faces a minimum of five years behind bars.

It is estimated that around half of Myanmar’s prison inmates are jailed for minor drug offences and arrests of drug users are rising.

A lack of funding for prevention work and treatment means Myanmar’s meth problem may only get worse.

Arr says: "I want to go back home and see my mother’s face, but I just can’t."