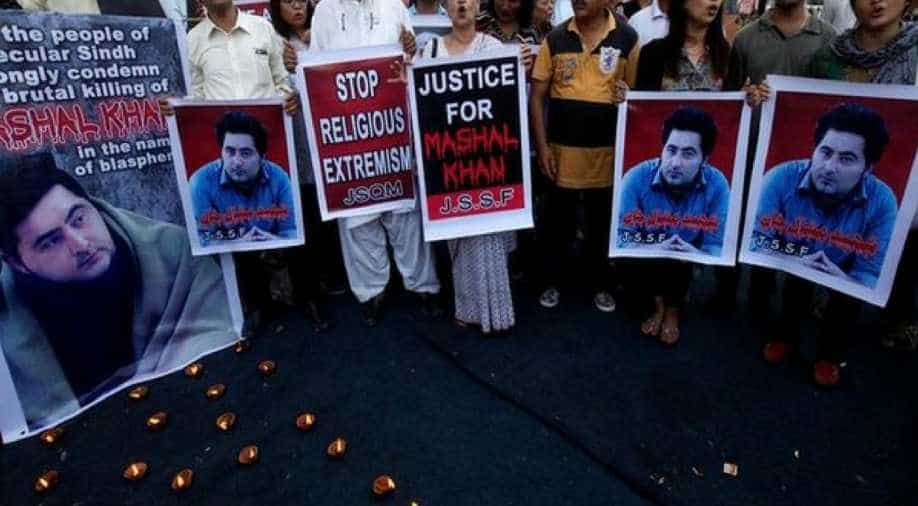 A protest against the murder of Mashal Khan is held in Islamabad. Photograph:( ANI )

Police in Pakistan's Mardan District on Thursday confirmed the arrest of Pakistan Tehreek-i-Insaf (PTI) Councillor Mohammad Arif for his role in the lynching of Mashal Khan, a student of the Abdul Wali Khan University in April last year.

Geo TV quoted police, as saying that Arif was arrested near Chamtar on the Ring Road. They said that he is one of the three accused of murdering Mashal Khan.

Arif was serving as the tehsil councillor of the Pakistan Tehreek-e-Insaf (PTI).

The punishment for the rest of the accused who were arrested was announced by an anti-terrorism court in Haripur on February 7 this year.

According to the verdict, one person was awarded death sentence, five life imprisonment, 25 were jailed for four years each, while 26 were acquitted over lack of evidence.

The 26 suspects released by the court received a 'hero's welcome' in their native towns of Swabi and Mardan after their release.

Later, Mashal's family challenged their acquittal as did the provincial government.

In an appeal filed with the Peshawar High Court, Mashal's brother Aimal Khan expressed reservations over the verdict, stating those who have been acquitted can be seen in the video of the incident when Mashal was tortured to death.

On February 27, a PHC division bench ordered the release on bail of the 25 accused who had been awarded three to four-year sentences in the case.

The 25 accused had pleaded that there was a provision in the law under which those sentenced to less than five years in jail could be released on bail while their appeal was being heard.