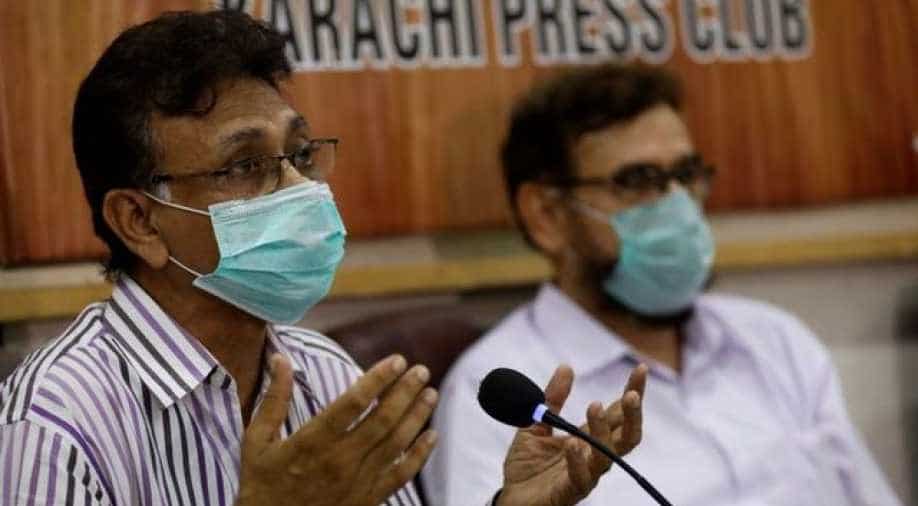 Dr Qaiser Sajjad, secretary-general of the Pakistan Medical Association (PMA) along with other doctors speaks during a news conference to appeal government and religious scholars for a strict implementation of the lockdown to prevent congregations in Ramadan, to stem the spread of the coronavirus disease, in Karachi, Pakistan. Photograph:( Reuters )

The doctors said a 20-point standard operating procedure for mosques agreed between the government and religious leaders was not practical or implementable.

Leading Pakistani doctors on Wednesday urged the government and clerics to reverse a decision to allow prayer congregations at mosques during the Muslim holy month of Ramadan, warning that the spread of coronavirus could spiral out of control.

The decision came three days after clerics said such limitations were not acceptable and after several incidents of clashes between police and worshippers.

Congregations increase in size during Ramadan, which is expected to begin on Friday in Pakistan.

“Unfortunately, our rulers have made a wrong decision; our clerics have shown a non-serious attitude,” Dr Qaiser Sajjad, secretary-general of the Pakistan Medical Association, told a news conference hastily convened by the doctors.

Pakistan, the world’s second most populous Muslim country after Indonesia, has reported more than 10,000 cases of the coronavirus, including 212 deaths.

Both the government and experts say the peak for infections is expected to hit in May.

Last week, Pakistan extended a nationwide lockdown for two weeks, but eased restrictions on some activities, including key industrial production and mosques.

The doctors said a 20-point standard operating procedure for mosques agreed between the government and religious leaders was not practical or implementable.

At this rate, Niaz added, medical facilities will face great difficulties in coming days and patients will have to be denied admission because there will be no beds.

In a statement distributed at the news conference, doctors called for strict enforcement of lockdowns, urging businesses to bear with the hardships for a few more weeks until the virus can be brought under control.

Prime Minister Imran Khan underwent a test for COVID-19, the respiratory illness caused by the coronavirus, on Wednesday after meeting an infected social worker last week. He tested negative.