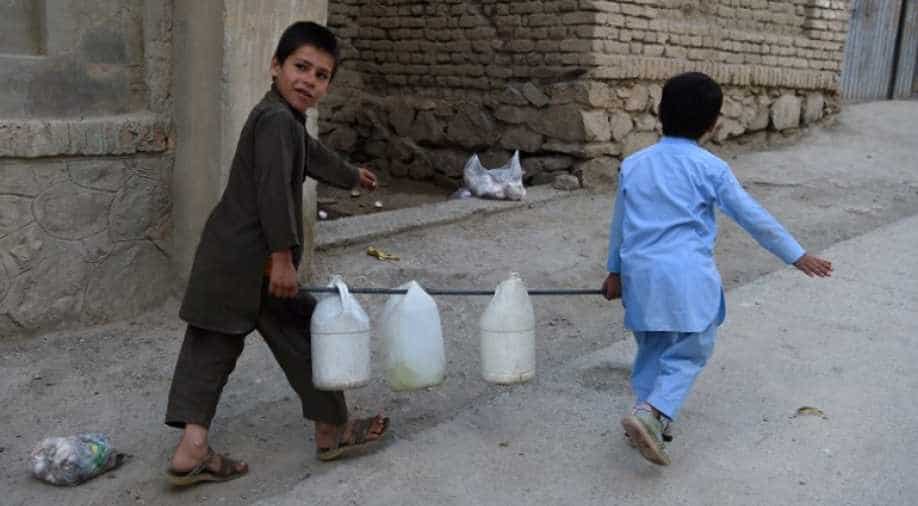 A shortage of rain and snow, a booming population and wasteful consumption have drained the Afghan capital's water basin and sparked a race to the bottom as households and businesses bore deeper and deeper wells in search of the precious resource.

Standing in his garden in Kabul, Baz Mohammad Kochi oversees the drilling of a new well more than 100 metres deep after his first water reservoir dried up. He is not alone.

A shortage of rain and snow, a booming population and wasteful consumption have drained the Afghan capital's water basin and sparked a race to the bottom as households and businesses bore deeper and deeper wells in search of the precious resource.

"The water level has dropped so much that it is now necessary to reach other underground basins 100 metres, even 120 metres" deep, says well digger Mohammad Aman as his dilapidated machine pierces the ochre earth in Kochi's yard.

Snow has fallen in the city this month but it is not nearly enough to solve the water shortage -- in some areas the level has dropped 20 metres in the past year.

"The problem we have in Kabul is the massive increase in population, impact of climate change and overall less precipitation and snowfall," Campbell explains.

Only around 20 per cent of Kabul is connected to the city's piped water system, leaving many residents to ensure their own supply by digging wells that are often shared by several neighbours.

Others buy water from private companies, or, like Mohammad Nazir, fill up jerry cans at mosques or more than 400 public taps scattered around the city.

"There is no point turning on the taps -- there is no water here," says Nazir, 50, who lives on a hill where the ground is too hard to dig a well and the city's pipes do not reach.

"It's the worst year we've ever lived."

Water is not only scarce in Kabul, but most of it is undrinkable, according to the National Environmental Protection Agency.

Around 70 per cent of the city's groundwater is contaminated by waste and chemicals from leaky household septic tanks and industrial plants that can cause diarrhoea or other illnesses if the water is not boiled or purified properly.

Efforts to increase connections to the municipal piped water network and improve sanitation systems are underway.

But progress is slow as authorities struggle to keep up with demand in one of the fastest growing cities in the world.

Kabul's population has more than doubled to around five million in the past 30 years, boosted by the arrival of people fleeing war and poverty.

It is expected to reach eight million by 2050, according to a report published in the Washington-based SAIS Review of International Affairs in 2017.

Improving living standards for many households also means more people are showering and washing cars than ever before.

A lack of public awareness about water conservation and no restrictions on its usage means much of it is wasted.

While they try to work out how to replenish the city's subterranean reserves, authorities are using a television campaign and the influence of religious leaders to encourage households to save water.

"In our Friday sermons, we call on the faithful not to waste water," said Abdul Raouf, a member of the Ulema Council, the country's highest religious body.

As they wait for the first winter snow in the city, worshippers also pray "for this drought to end as soon as possible".

Even the Taliban are on board, issuing a statement to followers to "pray for rain".

Authorities are not waiting for divine intervention to fix Kabul's water problem.

With droughts, like the one affecting swathes of Afghanistan this year, expected to increase in severity and frequency as a result of climate change, a long-term solution is needed.

Among the options being explored by the ADB are "spreading basins" -- large ponds that trap rainwater long enough for it to seep into the soil and recharge aquifers.

The ADB is also looking at using "pumps to inject the water directly into" the basins and the construction of a dam on the outskirts of Kabul.

"The answer is not in one technology but in a mixture," Campbell said.

"Kabul is under a situation of water stress so we're looking for a solution with lower impact, lower cost technology that could fix the problem quickly."

That would be welcome news to Kochi, who cannot hide his relief as water gushes out his new well. He knows the borehole could dry up again soon.

"We have survived revolution and civil wars, the Taliban regime and suicide attacks, but this water shortage may force us to leave," Kochi says.

"There is no life without water."