IT raids on Karnataka minister, Bengaluru resort where Gujarat Congress MLAs are holed up 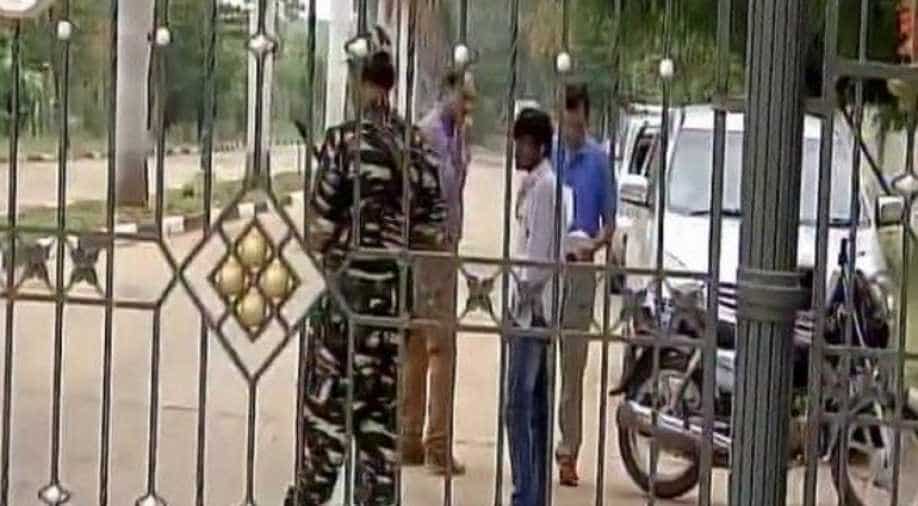 The Congress has reacted sharply to the raids, saying they are a 'witch hunt'. Photograph:( ANI )

The income tax department conducted raids Wednesday morning on Karnataka energy minister D Shivakumar's homes and the Eagleton Golf Resort in Bengaluru where the Gujarat Congress MLAs are holed up.

The income tax department said raids were conducted on 39 of Shivakumar's properties in Bengaluru and Delhi. It added that some 120 personnel carried out the raids.

And that they had taken the help central paramilitary forces to conduct the raids.

The MLAs are in Bengaluru because the Congress is worried they might defect to the BJP.

Six Gujarat Congress MLAs have already resigned from the party, with three of them joining the BJP.

Shivakumar is responsible for looking after the MLAs while they are in Bengaluru.

The Congress reacted sharply to the raids calling them a "witch hunt".

Rajya Sabha was adjourned after Congress MPs created an uproar in the house over the raids.

Patel is fighting the upcoming Rajya Sabha elections from Gujarat and his chances will be dented should any more of the Gujarat Congress MLAs leave the party.

"It is now becoming a trend to blatantly misuse powers of the state," ANI reported the Congress' Anand Sharma said in the Rajya Sabha.

He said D Shivakumar and his brother were coordinating the stay of the Gujarat MLAs, which is why the timing of the raids was "targeted".

"No search has taken place in the resort as such and no MLA was searched, only one particular Karnataka minister was searched," finance minister Arun Jaitley replied to the Congress' charges in the Rajya Sabha.

The income tax department later said only Shivakumar's room in the resort was searched, adding that their raid had been planned in advance and that it had nothing to do with the Gujarat Congress MLAs.

The resort however had received a notice from the income tax department two days before the MLAs got there. The notice said the resort owed Rs 982 crore.

The income tax department's argument did not wash with the Congress.

"They want no one on the Opposition benches and want everyone with BJP. Won't let this happen," ANI reported the Congress' Kapil Sibal as saying.

They want no one on the opposition benches and want everyone with BJP. Won't let this happen: Kapil Sibal, Congress on IT Raids pic.twitter.com/MVLvpkE82W

During the raid at the Delhi premises of Karnataka Minister DK Shivakumar, have recovered Rs 5 crore: IT official

IT raids began at 7 AM this morning; Karnataka energy Minister DK Shivakumar was in-charge of hospitality for Gujarat Cong MLAs in Bengaluru

BJP has used every dirty and ugly trick to run a conspiracy to win Rajya Sabha seat in Gujarat: RS Surjewala on IT raids at Eagleton resort pic.twitter.com/xiPS7j7kYq

Attempt was made to bribe legislators in Gujarat; when everything failed, a frustrated BJP Govt now resorting to IT raids on Cong: Surjewala pic.twitter.com/oJ84UuuVK2