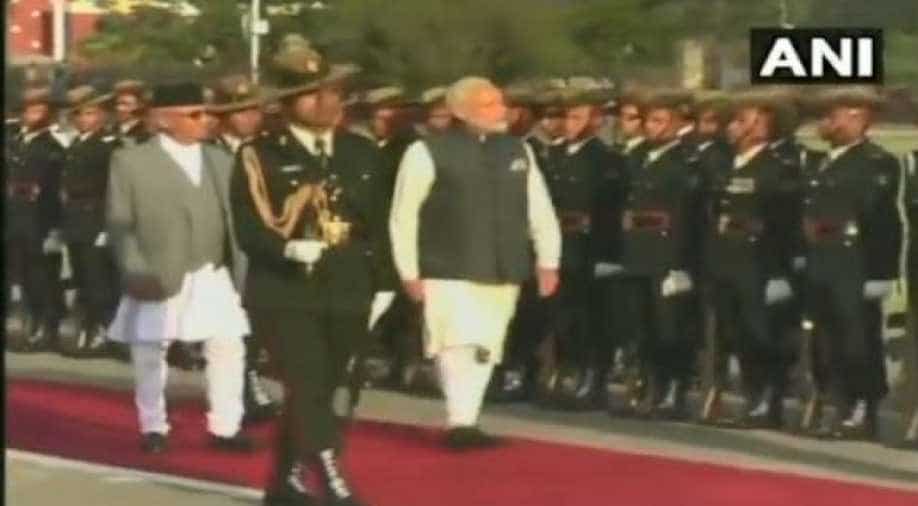 Prime Minister Narendra Modi, who is on a two-day state visit to Nepal, on Friday met Pradeep Kumar Gyawali, the Foreign Minister of Nepal.

Issues related to the trade deficit and low pace of the implementation of previous agreements were addressed during the delegation level talks held between them, Gyawali told ANI.

He said countries like Nepal want to be linked with various means. Boosting connectivity, through waterways, railways or through information technology can prove to be vital for Nepal's development, the foreign minister of the landlocked nation said.

"It is our consistent policy that Nepal doesn't allow anyone to misuse its territory. We have reiterated that principle. We have to be careful while maintaining the open border, which is a symbol of cordial relationship between both the countries," he added.

After holding talks over gamut of bilateral relations and inaugurating a hydropower project in Kathmandu, Prime Minister Narendra Modi posted a number of tweets hailing the ties between India and Nepal.

He first began by commending Nepal for successfully holding elections at all three levels: federal, provincial and local levels.

Following the above tweet, he expressed India's commitment towards the economic development of Nepal.

Earlier in the day, PM Modi met with President of Nepal Bidhya Devi Bhandari and his Nepali counterpart KP Sharma Oli in Kathmandu.

PM Modi and Oli laid the foundation stone of Arun-III, a hydropower project in Kathmandu.

After the visit to the temples, Prime Minister Modi is expected to engage with political leaders of various parties. He will attend the civic reception hosted by the mayor of Kathmandu and then depart for India on Saturday evening.

Prime Minister Modi arrived at the city of Janakpur in Nepal on Friday at about 10:45 am (local time).

He was received by Prime Minister Oli after which Prime Minister Modi performed puja at the Ram Janaki Temple and flagged off the shuttle bus service between Janakpur and Ayodhya.