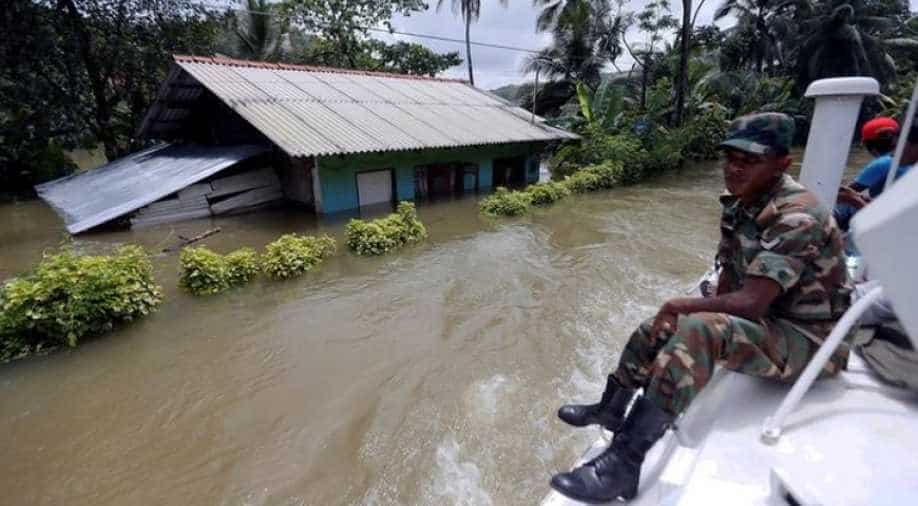 People are transported on top of an armoured personnel carrier on a flooded road as a man pushes his bike through the water, in Bulathsinhala village, in Kalutara, Sri Lanka May 27, 2017. Photograph:( Reuters )

Security forces stepped up search & rescue operations after weather condition improved & floodwaters receded||The flooding is the worst since May 2003 when 250 people were killed and 10,000 homes destroyed||India has sent ships to help with the rescue effort

The death toll from Sri Lanka's worst floods since 2003 today rose to 126, as security forces and rescuers stepped up search and rescue operations after weather condition improved and floodwaters receded.

Around 423,068 people belonging to 109,773 families were affected in 15 districts due to the flood situation, the Disaster Management Centre said today.

According to the Centre, 126 people were killed and 97 remained missing while 100,924 people belonging to 24,374 families were shifted to 304 safe locations.

"Although the heavy rainy condition has reduced temporary, showery conditions are likely to enhance again over south-western part of the island from 29th May 2017," the Meteorological Department said.

Hence windy condition is expected to continue over the sea areas. These winds can be strengthened during the showers, it said.
The fishing community in the country have been alerted about the condition.

The flooding is the worst since May 2003 when 250 people were killed and 10,000 homes destroyed after a similarly powerful Southwest monsoon, officials had said.

Last year, more than 100 people were killed in a massive landslide in the country.