China set to give $6 billion aid to Pakistan: Report 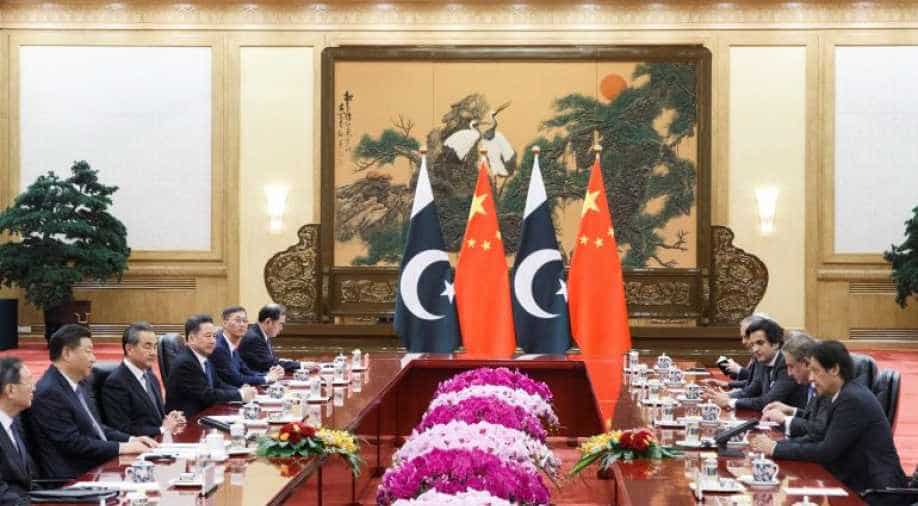 A loan of $1.5 billion is also expected to be offered, along with an additional package of three billion dollar for the China-Pakistan Economic Corridor (CPEC), the report said.

China on Friday reportedly agreed to provide $6 billion in aid to Pakistan, which is going through a "low point", to minimise the cash-strapped country's dependence on an IMF bailout package as Prime Minister Imran Khan held talks with Chinese President Xi Jinping.

Khan, who is here on his maiden visit, met Xi in the Great Hall of People where the two leaders also held one-on-one meeting besides delegation-level talks, Pakistani media reports said.

Pakistan is expected to receive $6 billion economic package from China during the visit, Geo TV quoted sources as saying.

A loan of $1.5 billion is also expected to be offered, along with an additional package of three billion dollar for the China-Pakistan Economic Corridor (CPEC), the report said.

The loan and the investments were reportedly part of the $6 billion package. However, there was no immediate official comment from Beijing on the report.

In his meeting with Xi, Khan, the cricketer-turned-politician, said: "my party (Pakistan Tehreek-e-Insaaf) has only been in power for two months. Unfortunately, we have inherited a very difficult economic situation.

"Countries go in cycles. They have their high points, they have their low points. Unfortunately, our country is going through a low point at the moment with two very big deficits, a fiscal deficit and a current account deficit. And so we, as I've said, have come to learn".

Xi assured Khan that China considers its relations with Pakistan a diplomatic priority.

"China has always supported Pakistan's safeguarding of national independence, sovereignty and territorial integrity, and the new Pakistani government's smooth running of the government and advancement of national construction," he said.

Xi told Khan that he highly valued the two country's relations, reaffirming they were "all-weather" friends.

"The Chinese side will continue to provide support and help to the best of its ability for Pakistan's economic and social development and national construction," China's Foreign Ministry cited Wang as saying.

China's expected assistance is the second $6 billion package which Khan has managed to obtain in the last few weeks as Pakistan reeled under severe financial crisis.

Finance Minister Asad Umar, who is accompanying Khan, earlier told media in Islamabad that Pakistan's strategy was to seek loans from multiple sources instead of asking the International Monetary Fund (IMF) alone to plug the entire gap in the country's financing needs.

He said Pakistan faced a deficit of $27 billion which included $9 billion debt repayment this year.

"After taking monetary and fiscal measures, in my opinion, our financing gap for this year will be around $12 billion," he said.

According to a report in the Hong Kong-based South China Morning Post on Friday, Pakistan borrowed $6 billion from China last year to increase its dwindling foreign reserves.

An IMF delegation is due to visit China next week and the Khan government wants to minimise the bailout package it seeks from the international lender.

"Khan has posited that Chinese and Saudi financial assistance will reduce the amount Pakistan needs to borrow from the IMF, mitigating Pakistan's susceptibility to the US demands that its CPEC debt be transparent.

"China wants to avoid such transparency because exposing the terms of the CPEC project agreements could validate the US criticism of the Belt and Road Initiative (BRI) as a debt trap for emerging economies," the Post report said.

He would hold talks with Chinese Premier Li Keqiang on Saturday after which both the countries would sign several agreements.

His visit here was regarded as significant as it is taking place amid critical remarks made by some ministers in Khan's Cabinet on the CPEC which had caused consternation among Chinese leaders considering the "all-weather" relations.

While Commerce Minister Dawood said some of the CPEC projects were unfair to Pakistani companies and should be put on hold for a year, Railways Minister Rasheed said Pakistan wants to cut the size of the $8 billion Karachi-Peshawar rail line, the biggest project of the CPEC, by $2 billion.

The statements evoked serious concerns in China as the CPEC is the flagship project of President Xi's pet multi-billion BRI.

The CPEC has also become a major irritant in India-China relations with New Delhi voicing its opposition to the infrastructure project as it traverses through Pakistan-occupied Kashmir.

From Beijing's point of view, Pakistan's criticism of the project was a shocker, especially after China's takeover of Sri Lanka's Hambantota port on a 99-year lease as a debt swap.