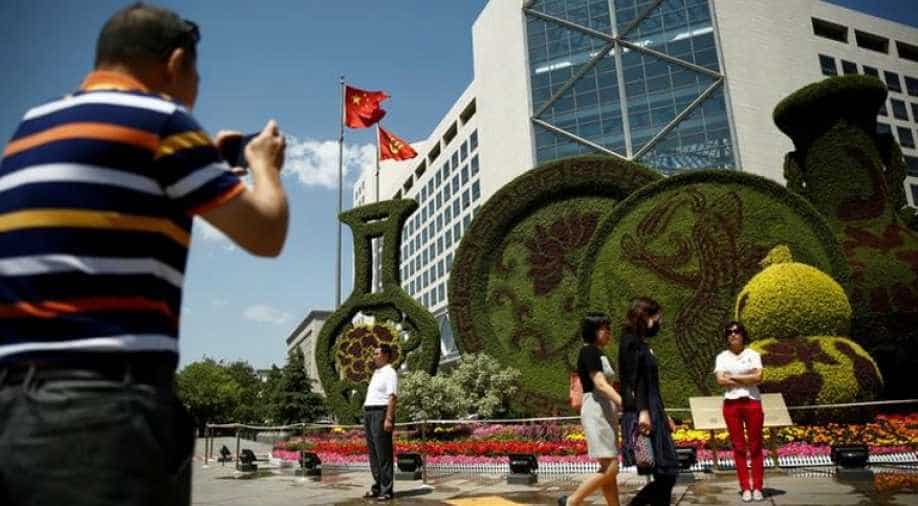 A man takes pictures of a flower display set up ahead of the Belt and Road Forum in Beijing on May 10. Photograph:( Reuters )

Sri Lanka rejected a request from China to dock one of its submarines this month||China said its submarines needed a place to resupply on their way to anti-piracy missions||Sri Lanka was 'unlikely' to agree to China's request to dock the submarine at any time, given India's concerns, an official said

China defended its military relationship with Sri Lanka as good for regional peace and stability after Sri Lanka rejected a request from China to dock one of its submarines in Colombo this month.

Sri Lanka last allowed a Chinese submarine to dock in the capital of Colombo in October 2014, a move that triggered fierce opposition from its northern neighbour India, which worries about growing Chinese activity in a country it has long viewed as part of its area of influence.

China's Defence Ministry, in a statement sent to Reuters, did not directly mention the rejected request for the submarine visit, but said its submarines needed a place to resupply on their way to anti-piracy missions.

"The stopping to resupply of our military's submarines that are on their way to the Gulf of Aden and Somali waters for protection missions is an internationally accepted practice," the ministry said.

In recent years, the Chinese and Sri Lankan militaries had had fruitful and effective cooperation in areas like mutual visits and training, it added.

"The cooperation between the Chinese and Sri Lankan militaries is beneficial to regional peace and stability, is not aimed at any third party and should not be interfered in by a third party," the ministry said, without elaborating.

The timing of the incident is awkward as Sri Lankan Prime Minister Ranil Wickremesinghe is expected in Beijing this weekend to attend a summit on China's new Silk Road plan.

A second official, at the defence ministry, also said China's request to dock this month had been rejected but that a decision on a further docking had been postponed.

More than 70 per cent of the trans-shipment in Colombo port comes from India.

Sri Lanka is finalising a plan to lease 80 per cent of its loss-making Hambantota port to China for 99 years, but the deal has been delayed because of opposition from trade unions.

A 1987 accord between India and Sri Lanka provides that their territories not be used for activities deemed prejudicial to each other's unity, integrity and security.