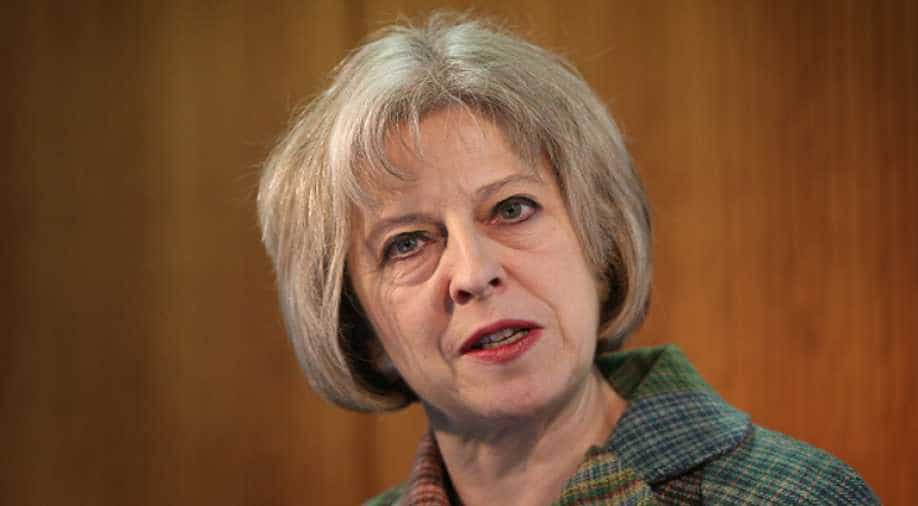 British PM Theresa May, however, cannot sign any bilateral trade deal with India as they are yet to leave the European Union bloc. Photograph:( Getty )

British Prime Minister Theresa May will lead a major business delegation to India this week, using her first trip outside Europe since the Brexit vote to push for more trade with the world's fastest-growing major economy.

While her government cannot yet formally open negotiations with the Indians on a trade deal, observers say May wants to send a message that Britain is already on the lookout for new bilateral accords outside the European Union.

After flying into New Delhi late Sunday, May is due to address a conference of Indian industrialists before holding talks with her counterpart Narendra Modi who is also keen to ramp up bilateral trade.

The two leaders spoke by phone earlier this week when May sent greetings for the Hindu festival of Diwali.

"Both leaders agreed there is substantial scope for further strengthening of bilateral cooperation across a range of sectors, including science and technology, finance, trade and investment," Indian foreign ministry spokesman Vikas Swarup said of the call.

May will be accompanied by dozens of businessmen, including the inventor James Dyson who was a vocal supporter of the campaign to pull Britain out of the European Union.

Liam Fox, another prominent figure in the Brexit camp who now heads a new department for international trade, will also be part of the delegation which will travel to the southern tech hub of Bangalore on Tuesday.

Fox is to hold talks with his Indian opposite number Nirmala Sitharaman on Monday which will specifically focus on bilateral trade issues.

Britain — which voted to leave the EU in a June referendum — cannot officially begin negotiations on any bilateral trade deals until after it has actually left the bloc, something unlikely to happen before 2019.

Dhruva Jaishankar, a foreign policy fellow at the Brookings India thinktank, said that should not prevent the two countries from seeking common ground, pointing out how Delhi has been frustrated in its efforts to seal its own free trade deal with the EU.

"India's importance for Britain is from the fact that it is one of the world's fastest growing economies and a huge market," Jaishankar told AFP.

"And India sees an opportunity post-Brexit as the long pending India-EU free trade agreement hasn't seen much movement and so there is an opportunity for it to get more favourable (trade) terms from the UK."

The Spectator, a right-wing British magazine that is influential in the governing Conservative party, said May's visit had "huge significance" and the premier had "chosen her destination shrewdly".

"For the first time in four decades, a British Prime Minister can discuss doing trade deals — something which we have until now been forced to contract out to officials in Brussels," it wrote in an editorial.

"Britain's historic links with India make it an ideal place to begin forging our post-Brexit relationship with the world. We share a common language and there is a huge Indian diaspora in the UK."

India has the added attraction of being the world's fastest growing major economy, having outpaced China for more than a year.

Although growth has slowed recently, the International Monetary Fund has forecast GDP will expand by 7.6 percent in the 2016-17 financial year.

Despite their historical ties from the colonial era, bilateral trade is at a relative low level, measuring 14 billion dollars last year — smaller than the volume of trade between India and Germany.

And ties have not been helped by Britain's imposition of visa restrictions on Indian students wanting to stay on after completing university courses.

The restrictions, brought in by May in her previous job as interior minister, have led to a near 50 percent fall in the number of Indian students enrolling in British universities, according to Swarup.

The analyst Jaishankar said May would have to tread carefully, knowing the Indian government would like to see an easing of the restrictions but aware that immigration is now a toxic political issue among British voters.

"She will have to navigate these issues carefully, at least in public. Anything she speaks on visa regime that appeals to public in India won't resonate well with Brexit voters," he said.