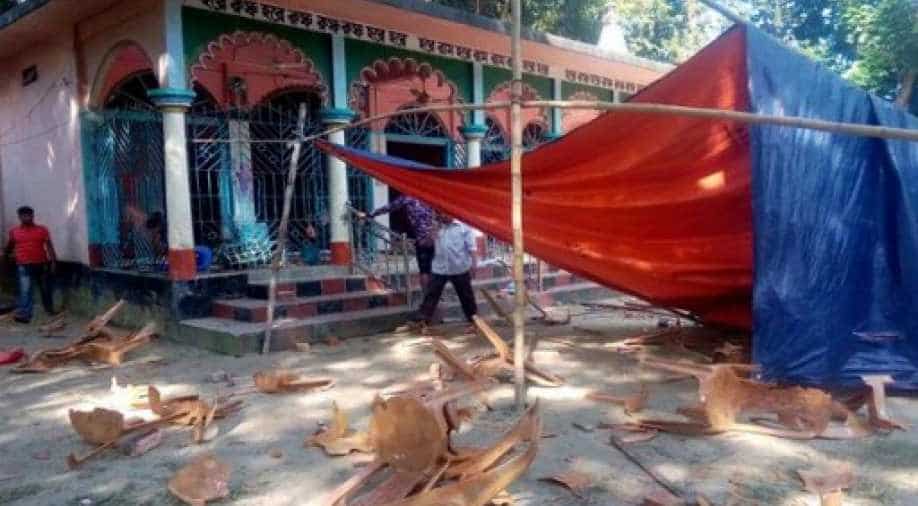 Bangladesh residents stand near a vandalised Hindu temple in the eastern district of Brahmanbaria in October. Photograph:( AFP )

A Hindu temple was vandalised and three idols of deities were found desecrated in Bangladesh on Sunday.

The attack comes barely a month after over a dozen temples were attacked following a blasphemous Facebook post put up by a Hindu man.

The remnants of broken idols of Hindu god Shiva and goddess Kali were found lying about 600 metres from the temple in Bangladesh's northern Netrokona area, Bangladeshi newspaper Dhaka Tribune reported.

Police have found that the door of the temple was not locked at night. They have launched a manhunt, said officer-in-charge Shahnur-e-Alam.

"We are treating the case with priority. A group with vested interests may have carried out the crime to disrupt communal harmony," Netrokona Superintendent of Police Joydeb Chowdhury said.

In the last week of October, there were attacks on around 15 temples and 20 houses belonging to Hindus in Brahmanbaria area after a fisherman put up a Facebook post mocking one of Islam's holiest sites -- the Kaaba in Mecca, Saudi Arabia.

The fisherman had put an edited photo of a Hindu deity inside the Kaaba.

Bangladesh police had arrested a cuber cafe owner for organising the attacks.