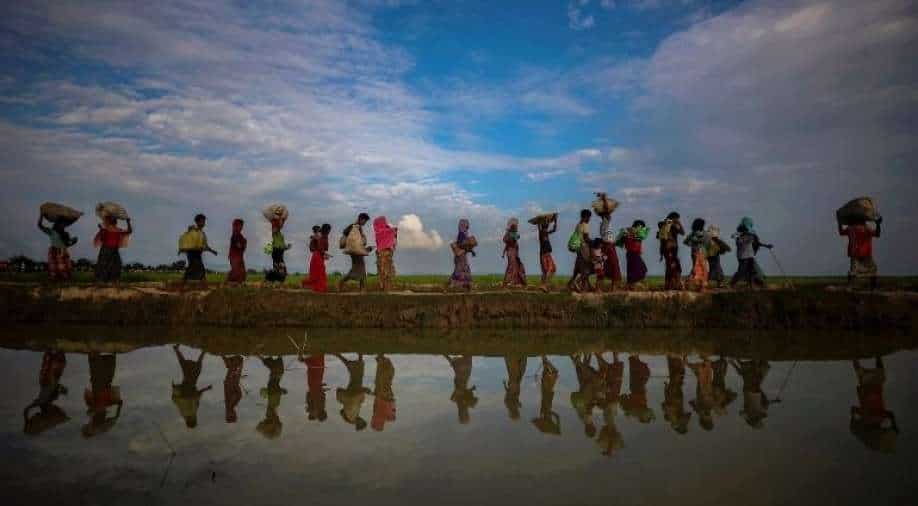 Rohingya refugees are reflected in rain water along an embankment next to paddy fields after fleeing from Myanmar into Palang Khali, near Cox's Bazar, Bangladesh November 2, 2017 Photograph:( Reuters )

Bangladesh called for "peace and stability" in Myanmar after a military coup on Monday, and said it hoped its neighbour makes genuine efforts to move forward the stalled process of voluntary repatriation of Rohingya Muslim refugees

Bangladesh called for "peace and stability" in Myanmar after a military coup on Monday, and said it hoped its neighbour makes genuine efforts to move forward the stalled process of voluntary repatriation of Rohingya Muslim refugees.

Mainly-Muslim Bangladesh has sheltered 1 million Rohingya who had fled violence in Buddhist-majority Myanmar, where most of them are denied citizenship.

A UN-backed repatriation process has failed to take off despite multiple attempts from Bangladesh, which has now started sending some refugees to an isolated island in the Bay of Bengal.

"We have been persistent in developing mutually beneficial relations with Myanmar and have been working with Myanmar for the voluntary, safe and sustained repatriation of the Rohingya sheltered in Bangladesh," the Ministry of Foreign Affairs told Reuters in a statement.

"We expect these processes to continue in right earnest."

Myanmar's military seized power on Monday in a coup against the democratically elected government of Nobel laureate Aung San Suu Kyi, who was detained along with other leaders of her National League for Democracy party in early morning raids.

"We hope that the democratic process and constitutional arrangements will be upheld in Myanmar," Bangladesh said.

Suu Kyi's international reputation was damaged after she failed to stop the forced expulsion of hundreds of thousands of Rohingya from western Rakhine State in 2017.

Nevertheless, Rohingya in Bangladesh expressed fears for their people still in Myanmar following the military's ouster of Suu Kyi.

"She was no good for us but there was still hope that through the democratic process we could achieve our rights. Now it seems Myanmar has no democratic future in the near term," a 31-year-old Rohingya told Reuters by telephone from a refugee camp, asking not to be named for fear of reprisal.

"We are very concerned.... Terrified about what’s going to happen to the Rohingya Muslims in Myanmar," he said.

Dil Mohammed, a Rohingya leader in one of the camps, told Reuters: "We urge the global community to come forward and restore democracy at any cost."