After attack on shrine, Pak army says over 100 'terrorists' killed 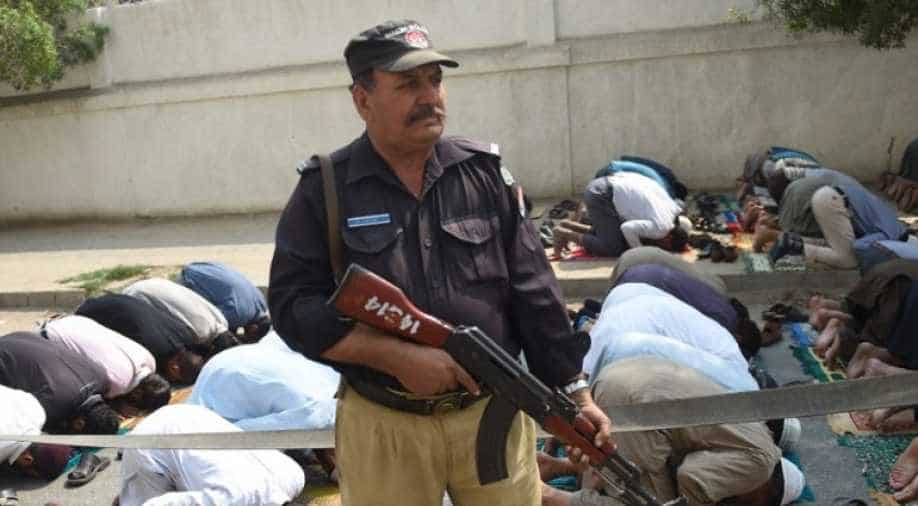 Officials said the number of people killed in the shrine blast had jumped to 88, including at least 20 children, making it the deadliest attack in Pakistan since a 2014 assault on a Peshawar school. Photograph:( AFP )

Pakistani forces said Friday they had killed more than 100 "terrorists" after 88 people died in an attack claimed by the Islamic State group on a Sufi shrine which stoked fears of a fresh surge in militancy.

The devastating blast came after a series of bloody extremist assaults this week, including a powerful Taliban suicide bomb in the eastern city of Lahore which killed 13 people and wounded dozens.

Sharif vowed to eliminate militants "with the full force of the state".

Pakistan's military later said operations were in progress across the country. "Over 100 terrorists have been killed since last night", it said, adding others had been detained.

The emergence of Islamic State group (IS) and a Taliban resurgence would be a major blow to Pakistan, and the attacks have dented growing optimism over security after a decade-long war on militancy.

The centuries-old shrine's white floor was smeared with blood, scattered with shoes, shawls, and baby bottles.

At 3.30 am the shrine's caretaker stood among the carnage and defiantly rang its bell, a daily ritual that he vowed to continue, telling AFP he will "not bow down to terrorists".

Health officials said the number of people killed in the shrine blast had jumped to 88, including at least 20 children, making it the deadliest attack in Pakistan since a 2014 assault on a Peshawar school.

Islamabad has denied the presence of IS, despite several high-profile attacks and the group's apparent affiliation with homegrown militants, such as the banned Sunni sectarian organisation Lashkar-e-Jhangvi (LeJ).

"I think they (IS) are capable of doing this" with help from homegrown groups, security expert Amir Rana said of the shrine bombing, as analyst Imtiaz Gul warned the group would claim more such attacks.

Gul also warned there are "visible signs" that factions of the umbrella Tehreek-e-Taliban Pakistan (TTP, or Pakistani Taliban), which is distinct from the Afghan Taliban, are regrouping after a military crackdown.

TTP faction Jamaat-ul-Ahrar claimed the Lahore attack on Monday, days after it announced a fresh offensive. Two members of a bomb disposal team in Quetta, capital of southwestern Balochistan province, were killed the same day defusing a device there.

On Wednesday four suicide bombers struck in one day in the tribal areas and on a van carrying judges in Khyber Pakhtunkhwa provincial capital Peshawar, killing six people in attacks also claimed by the TTP.

An IED attack in Balochistan which killed three soldiers Thursday unnerved Pakistanis further, while gunmen on motorcycles killed four policemen and a civilian in the northwest overnight Friday.

But both the military and the foreign office said the recent attacks had been carried out from sanctuaries in Afghanistan, and that Kabul had been asked to take action. Neither referred specifically to the IS claim.

Pakistan's push against extremism was stepped up after the country`s deadliest ever attack, a TTP assault on a school in Peshawar in 2014 which left more than 150 people dead -- mostly children.

Critics have long argued the military and government crackdown does not address the root causes of extremism.

Security officials said at least 18 terrorists had been killed in Sindh province overnight, and 13 more in the country's northwest.

Pakistanis vented their grief and fury at the bombings on social media and with small protests in some cities.

"The government should identify and punish these terrorists," Ghulam Shabbir Bhatti, a resident of Sehwan, said.

"Sunnis, Shias, Hindus, ppl from all faiths visit Sehwan... This is an attack on our identity & culture," wrote Twitter user Zahraa Saifullah.

Sufism, a mystic Islamic order that believes in living saints, worships through music and is viewed as heretical by some hardline groups.

IS has targeted Sufi shrines in Pakistan previously, killing 52 at a shrine in Balochistan last year.