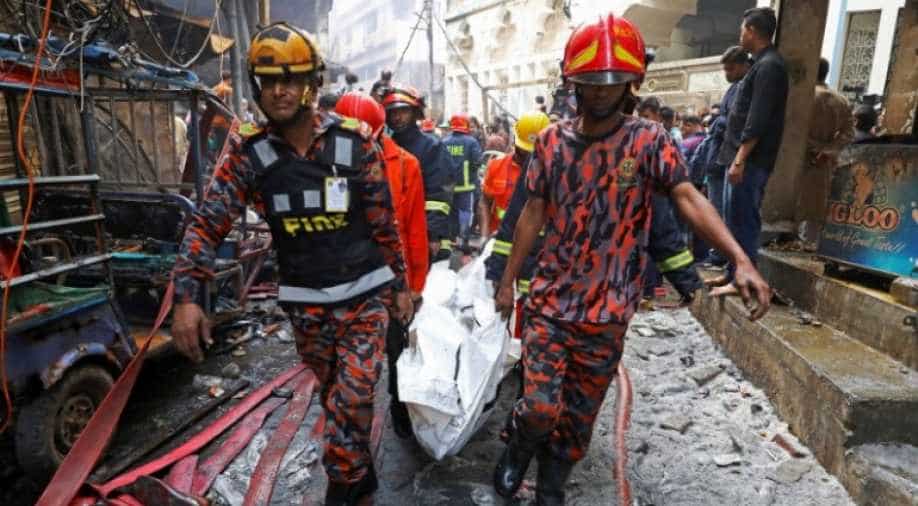 A dead body is carried out from a burnt warehouse in Dhaka, Bangladesh. Photograph:( Reuters )

Earlier, fire service control room spokesman Kamrul Ahsan said that the death toll was 81. However, it was later revised downward to at least 70.

A fast-moving fire swept through adjoining apartment buildings and chemical warehouses in a historic part of the Bangladesh capital Dhaka, killing at least 70 people and injuring several others, the latest such deadly blaze in the country.

Officials said the fire broke out at night a chemical warehouse on the ground floor of a four-storey building named Hazi Wahed Mansion behind a mosque in Old Dhaka's congested Chawkbazar area on Wednesday night and the flames then quickly spread through four other buildings nearby, including a community centre where a wedding party was on.

Fire officials said that the blaze has claimed at least 70 lives so far.

Earlier, fire service control room spokesman Kamrul Ahsan said that the death toll was 81. However, it was later revised downward to at least 70.

Dhaka Metropolitan Police officials said the fire spread rapidly due to the multiple chemical godowns that were situated in the area.

State-run Dhaka Medical College Hospital's director Brigadier General AKM Nasiruddin, however, feared that the toll may rise as several people were being treated at the facility with critical burn injuries.

Khokon called off the rescue operation around 12:10 PM after nearly 14 hours of efforts. Two-hundred fire-fighters from 37 units doused the blaze, making their way to the scene through narrow lanes with fire engines.

"Some of the bodies were burned very badly, difficult to be identified... Of the victims, five are children and nine women," a doctor said.

Bangladesh's fire service chief Ali Ahmed said the blaze may have started with a gas cylinder before quickly spreading through the building where chemicals were stored.

"The flames raced through four adjoining buildings, which were also used as chemical warehouses. There was a traffic jam when the fire broke out. It spread so quickly that people could not escape," he said.

TV images showed the main gate of one of the buildings was locked, leaving its residents trapped, unable to escape the blaze as it swept through its five storeys.

Witnesses said the victims also included passersby, some people who were eating food at a nearby restaurant and some members of a wedding party.

Some of the residents were injured after they jumped off the building.

The officials said narrow lanes made it difficult for the fire engines to reach the spot. The firefighters used helicopters and long hose pipes to set off the blaze.

President Abdul Hamid and Prime Minister Sheikh Hasina mourned the casualties and ordered the best possible treatment for those injured. State-run facilities were asked to provide free of cost services to the injured.

The four-storey building where the fire started is at the risk of collapsing due to damage, according to media reports.

The first floor of the building was being used as a warehouse of plastic goods, cosmetics and perfume. Some families lived on the upper floors, according to residents.

The ground floor of the building, where the fire originated, had several shops.

The fire from the building immediately caused an electric transformer to explode, which set ablaze several cars parked on the alley. The alley was packed with people because of a wedding ceremony that was being held in the nearby community centre.

An investigation panel has been formed to identify the reason behind the fire.

The fire brings back the terrifying memories of another massive blaze in 2010 in an old Dhaka building at Nimtoli, which was also used as a chemical warehouse, that killed more than 120 people in one of the worst fire tragedies in Bangladesh.

It had sparked a public outcry, demanding the relocation of chemical warehouses and stores from the area, but little has been done in the last nine years. The authorities had listed 800 warehouses in the neighbourhood for their transfer to Keraniganj on the outskirts of the capital.

The lack of safety regulations in the country was highlighted in 2013 when over 1,100 people died and thousands more were injured when a building housing garment factories in Dhaka collapsed.