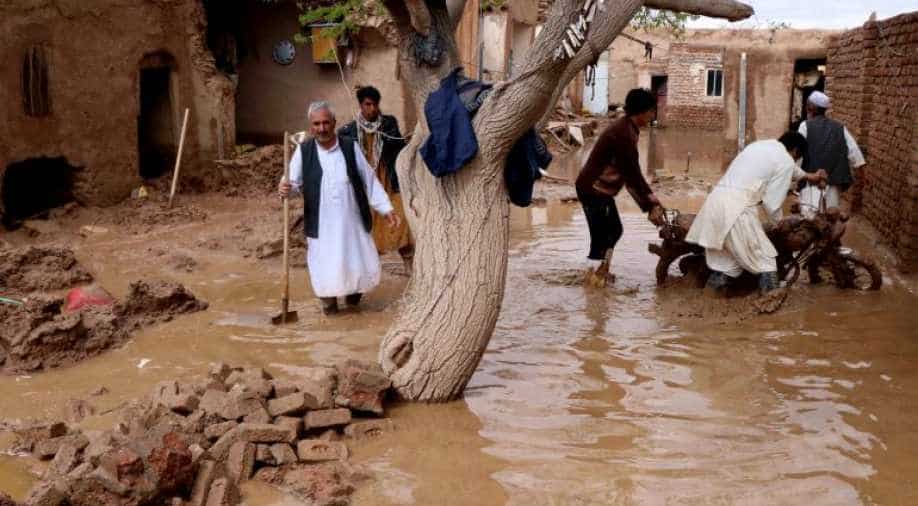 Torrential rains last week sent churning water roaring down the narrow valley that is home to the minaret, a UNESCO World Heritage Site located in a remote part of the western province of Ghor.

The minaret of Jam, a revered Afghan historical treasure, has been saved from imminent danger after hundreds of workers diverted surging floodwaters that were gnawing at the 12th-century tower, officials said Monday.

Torrential rains last week sent churning water roaring down the narrow valley that is home to the minaret, a UNESCO World Heritage Site located in a remote part of the western province of Ghor.

Dramatic video footage showed brown torrents crashing up against the base of the brick minaret, which was built in about 1190 and is the pinnacle of a surrounding archaeological site.

The Afghan government hired a local crew who worked for three days to channel water away from the minaret.

"Now the flow of water has been diverted but the flood has destroyed some 15 metres (50 feet) of protection wall around the minaret," Abdul Hai Khatebi, a spokesman for the governor of Ghor, told AFP.

Fakhruddin Ariapur -- the Ghor province director of information and culture -- said a team of experts is urgently needed to clean the base of the minaret and construct proper defensive walls.

"There is no danger to it now, but if it rains and floods again, the minaret has become too exposed and vulnerable," he told AFP.

The Jam minaret, located in an area largely under Taliban control, is the world's second tallest made of bricks, reaching a height of 65 metres (213 feet).

It is situated on the frontier of Ghor and Herat provinces, at the heart of the former Ghorid empire which dominated Afghanistan and parts of India in the 12th-13th centuries.

In 2002, the minaret and its archaeological remains became the first site in Afghanistan to be added to UNESCO's World Heritage List.

UNESCO said it had not yet been able to access the minaret.

"As soon as the conditions on site allow, a mission will be organised... in order for experts to properly assess the situation and the condition of the minaret," UNESCO said in a statement.

Built on an octagonal base, the minaret has a double staircase on the inside and is elaborately decorated.

Afghanistan's rich cultural heritage has faced decades of catastrophic neglect, mismanagement and looting, as well as deliberate destruction at the hands of the Taliban.

Afghanistan chief executive Abdullah Abdullah said in a cabinet meeting that the government needs "to take more serious measures to prevent future threats to the minaret".