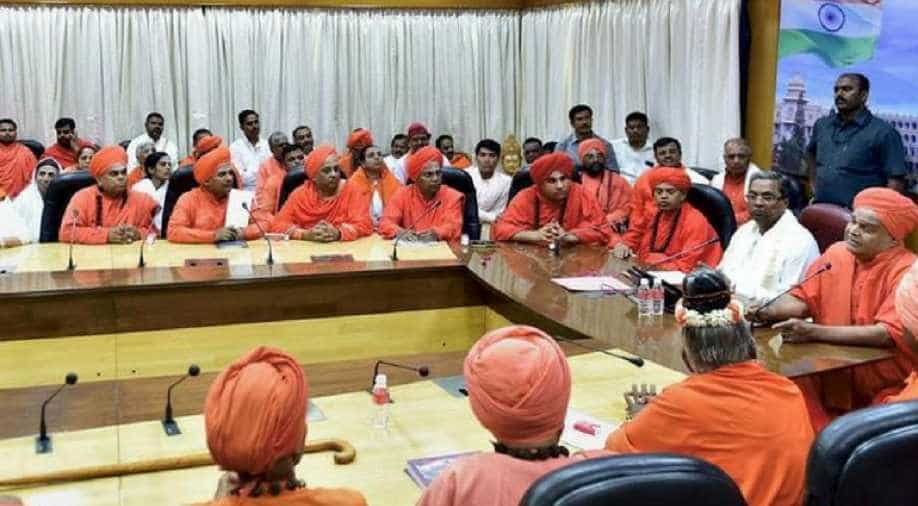 The Union Home Ministry will examine in detail the Karnataka government's recommendation to grant religious minority tag to the Lingayat and Veerashaiva Lingayat community as and when it receives the proposal, an official said today.

The central government's reaction came a day after the Congress government in poll-bound Karnataka decided to recommend that religious minority tag be granted to the numerically strong and politically-influential Lingayat and Veerashaiva Lingayat community.

The issue of granting religious minority tag to the Lingayat and Veerashaiva Lingayat community will be examined as and when the Home Ministry receives the proposal from the Karnataka government, a senior home ministry official said here.

The Home Ministry is expected to forward the proposal to the Registrar General & Census Commissioner for a detailed examination and suggestions, another official said.

The Karnataka government took the decision following a recommendation of an expert panel set up by the state government on the issue.

According to the expert panel, Lingayats and Veerashaiva Lingayats are those who believe in the philosophy of Basaveshwara, 12th-century social reformer.

The demand for a separate religion tag to Veerashaiva Lingayat faiths has surfaced from the community, amidst resentment from over projecting the two communities as the same.

While one section led by Akhila Bharata Veerashaiva Mahasabha has demanded separate religion status, asserting that Veerashaiva and Lingayats are the same, the other group wanted it only for Lingayats.

They believe that Veerashaivas are one among the seven sects of Shaivas, which is part of Hinduism.

Of late, some Lingayats have also stated that they were open to having the Veerashaivas under their umbrella, but the Lingayat nomenclature was non-negotiable.

The Lingayat Veerashaiva community that owes allegiance to the "social reform movement" initiated by Basaveshwara has a substantial population in Karnataka, especially in the northern parts of the state.

The BJP and several sections of the Hindu community have maintained a cautious stance, keeping away from the move to give Veerashaiva Lingayat separate religion status. They have accused the Siddaramaiah government of dividing the society to draw political mileage ahead of assembly elections due in the next couple of months.