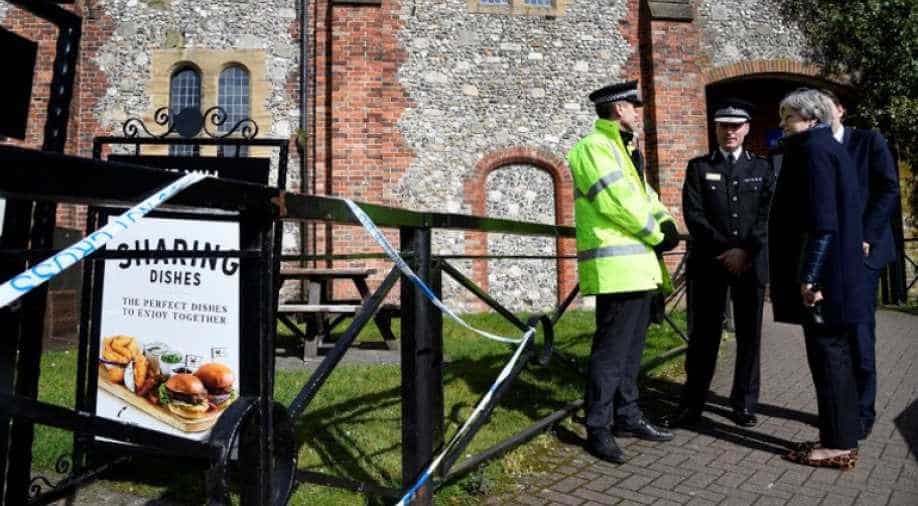 In a joint statement, the leaders of Britain, France, Germany and the United States demanded Moscow 'address all questions' related to the attack against former Russian spy Sergei Skripal and which they said amounted to a 'breach of international law'

Britain and its allies on Thursday escalated diplomatic tensions as they blamed Moscow directly for a poison attack on a double agent in England.

In a joint statement, the leaders of Britain, France, Germany and the United States demanded Moscow "address all questions" related to the attack against former Russian spy Sergei Skripal and which they said amounted to a "breach of international law".

The countries said there was "no plausible alternative explanation" for the use of the Soviet-designed nerve agent Novichok in the English city of Salisbury.

British Prime Minister Theresa May who made her first visit to Salisbury since the attack, where she also met a police officer injured in the incident, said it was important to send a "united" response.

"This happened in the UK but it could have happened anywhere and we take a united stance against it," she said.

US President Donald Trump said, "It certainly looks like the Russians were behind it. Something that should never, ever happen, and we're taking it very seriously."

NATO allies on Wednesday put out a joint statement condemning the attack, and Secretary General Jens Stoltenberg said it must have "consequences".

He said Britain had not invoked the alliance's Article 5 mutual defence clause.

But he noted the attack came against the "backdrop of a pattern of reckless behaviour" by Russia -- a point also made in the US, British, German and French statement.

"I decided not to go to the official Russia stall... in solidarity with our British friends," he told reporters, adding Paris was in contact with London to decide on "appropriate answers to this aggression on the soil of our British allies".

Skripal, who moved to Britain in a 2010 spy swap, had taken his daughter Yulia, who was on a visit, out for lunch before they both collapsed on a bench in the street on March 4.

Intelligence agencies now believe the nerve agent used on the pair was planted in the daughter's suitcase before she left Moscow, AFP quoted the Daily Telegraph as reporting late Thursday.

"They are working on the theory that the toxin was impregnated in an item of clothing or cosmetics or else in a gift that was opened in his house in Salisbury, meaning Miss Skripal was deliberately targeted to get at her father," the newspaper said.

On Wednesday, Theresa May announced the expulsion of 23 Russian diplomats and suspended high-level contacts. She announced that British royals and ministers would boycott this summer's football World Cup in Russia.

The British PM warned more measures could follow, noting that the US-led NATO alliance and the UN Security Council had discussed the attack, while it was also expected to be on the agenda of the European Union summit next week.

Russia has denied any involvement in the attack, the first offensive use of a nerve agent in Europe since World War II.

He said his country had no motive to target Skripal, but suggested other players could use the poisoning to "complicate" the World Cup.

He also accused Britain of trying to "deflect attention" from its decision to leave the European Union, which has cast uncertainty over its place in the world.

The crisis comes as Russia prepares for a presidential election on Sunday in which Vladimir Putin is expected to easily win a fourth term.

The British, US, French and German leaders called on Russia to provide "full and complete disclosure" of the Novichok programme to the Organisation for the Prohibition of Chemical Weapons (OPCW).

Deputy foreign minister Sergei Ryabkov, however, said Moscow never had any such programme.

He slammed people "distributing information that the programme allegedly existed," an apparent reference to Soviet chemist Vil Mirzayanov, who first revealed the existence of that class of ultra-powerful nerve agents.

Russia says it has destroyed all its chemical weapons and shut down its military chemical programme in the mid-1980s.

Britain had demanded Russia disclose details of the programme to the OPCW by midnight on Tuesday, but Moscow refused to respond to the "language of ultimatums".

Russia has complained that it has had no access to nerve agent to be able to analyse it.

However British Foreign Secretary Boris Johnson told the BBC that Britain is "entirely in conformity" with OPCW procedures and is sending a sample of the nerve agent to the watchdog for examination.