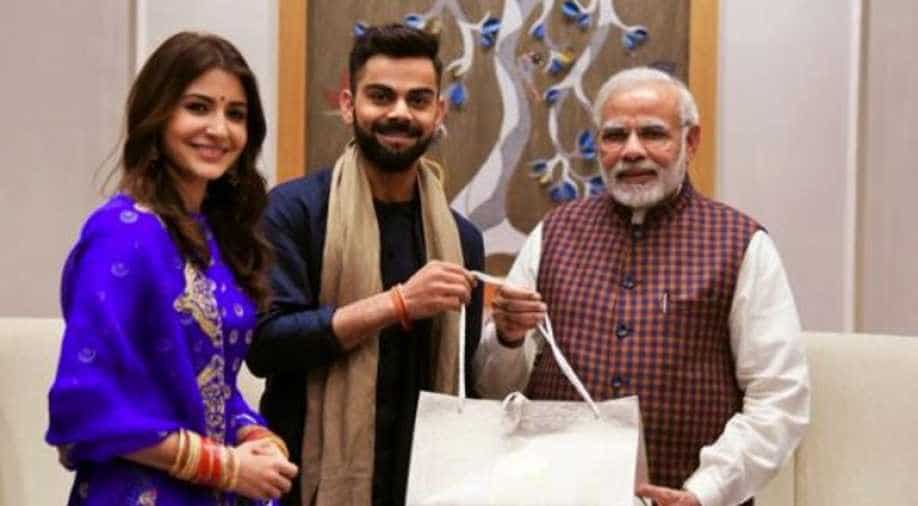 Virat and Anushka invited the prime minister to their wedding reception. Photograph:( ANI )

The twitter handle of the prime minister's office posted a picture of the meet.

"Captain of the Indian cricket team @imVkohli and noted actor @AnushkaSharma met PM @narendramodi this evening. The Prime Minister congratulated them on their wedding," it said.

Captain of the Indian cricket team @imVkohli and noted actor @AnushkaSharma met PM @narendramodi this evening. The Prime Minister congratulated them on their wedding. pic.twitter.com/sFP52DCJH3

News reports said the couple, who got married on December 11 in Tuscany, Italy, invited Modi to their wedding reception.

The wedding itself was a private affair, with only friends and family in attendance.

There has been some controvery over the wedding too, with a BJP MLA from Madhya Pradesh asking on Tuesday why Virushka had got married outside the country.

That the MP said was not very patriotic of them.

Interestingly, the cricketer Gautam Gambhir came out in support of Kohli -- the two reportedly did not get along on the pitch -- on Wednesday.

Politicians, Gambhir said, should not poke their noses in other people's private affairs.

In other just-as-important news, news reports said Wednesday that the rock Virat gave Anushka on their engagement cost Rs 1 crore.