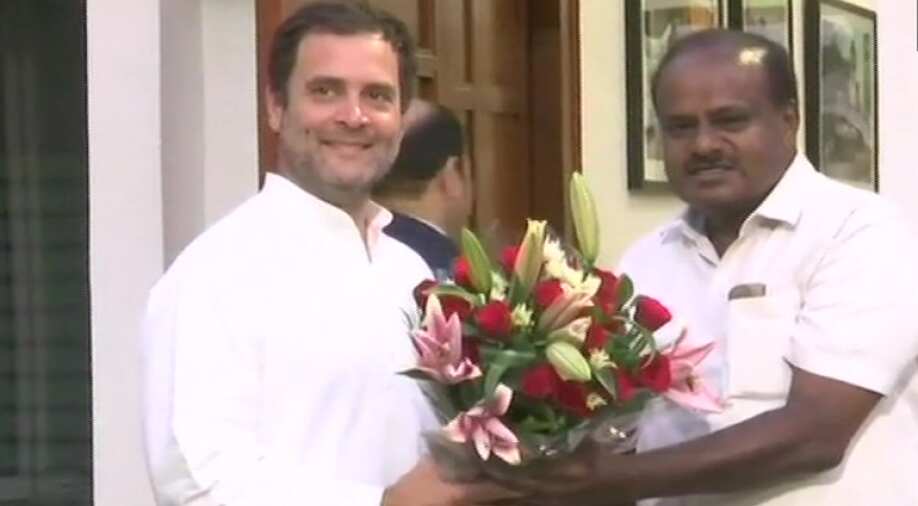 Congress President Rahul Gandhi on Monday said that he had a warm and cordial meeting with JD(S) leader H D Kumaraswamy in New Delhi.

"I had a warm and cordial meeting this evening, in Delhi, with Shri H D Kumaraswamy Ji. We discussed the political situation in Karnataka and other matters of mutual interest. I will be attending his swearing-in as CM of Karnataka, on Wednesday, in Bengaluru," he tweeted.

Meanwhile, Janata Dal-Secular (JD-S) leader HD Kumaraswamy said that he is confident that the yet-to-be sworn in the coalition government with the Congress in Karnataka will be stable.

HD Kumaraswamy spoke to reporters on the question of who will become Deputy chief minister of Karnataka.

"I wanted to show my respect & regards to Gandhi family. That's why I came here. I requested them for further presence in oath taking ceremony. Both of them agreed to be present at the oath-taking ceremony," said HD Kumaraswamy, Karnataka CM designate after meeting Sonia Gandhi and Rahul Gandhi.

ANI quoted him as saying that Rahul Gandhi has given permission to Congress general secretary KC Venugopal to finalise everything.

He further said that Rahul would carry out a discussion with local leaders and finalise the issue.