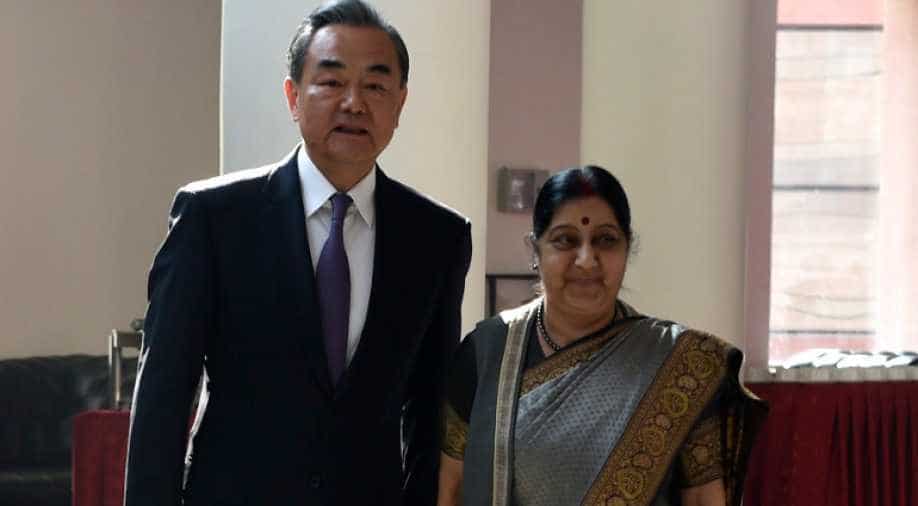 Referring to trade ties, Swaraj said there was a need to find a solution to India's expanding trade deficit with China and hoped that China will provide support for market access to Indian goods and services.

Eyeing a new chapter in Sino-India ties, External Affairs Minister Sushma Swaraj and her Chinese counterpart Wang Yi on Friday held extensive talks under a new set up framework and agreed on "ten pillars" of cooperation to enhance cultural and people-to-people exchanges.

In her media statement, Swaraj said the armies of the two countries are working to strengthen communication and striving to implement confidence-building measures that will help in maintaining peace and tranquillity in border areas, which she said, is an important prerequisite for development of ties.

Referring to trade ties, Swaraj said there was a need to find a solution to India's expanding trade deficit with China and hoped that China will provide support for market access to Indian goods and services.

In their talks under the 'High Level Mechanism on Cultural and People-to-People Exchanges', the two foreign ministers deliberated for around two hours on ways to boost people-to-people contact and cultural exchanges between the two neighbours.

The setting up of the new mechanism was decided upon during the Wuhan summit between Prime Minister Narendra Modi and President Xi Jinping.

"Our leaders had realised that unless we have better people-to-people cooperation, we cannot have close cooperation between the two countries," said Swaraj.

Chinese State Councilor and Foreign Minister Wang Yi: We agreed to leverage strengths in respective fields. People to people exchanges should be of the people and for the people. It is a major initiative in the history of India and China relations. pic.twitter.com/ilVvycgB0G

"I am very happy over outcome of our talks... I am confident that the new mechanism will help both the countries in building greater synergies in bilateral ties," she said in her media statement in the presence of Wang.

Since the resolution of the Doklam face-off, the two countries have taken a series of measures to enhance overall ties.

Wang, who arrived here early Friday morning, said he had a "very successful" meeting with Swaraj.

Swaraj said she and Wang held a series of bilateral meetings in the last few years and talks on people-to-people contacts and cultural exchanges were for not more than 10 minutes in each of the meetings.

"But today, the meeting was very unique and very different. And the reason for it was that we focused on two subjects during the two-hour deliberations -- people-to-people relations and cultural exchanges," she said.

Swaraj said India and China have agreed on '10 pillars' of cooperation to enhance cultural and people-to-people exchanges.

Swaraj said both sides made good progress in ties in 2018 and an ambitious agenda is being prepared for next year.

"We are confident that the visit of Xi Jinping to India next year for the second informal summit will add another new facet to our continuously expanding ties," Swaraj said.

Wang described the new mechanism for cultural and people-to-people exchanges as a "major initiative" in the history of India-China ties.