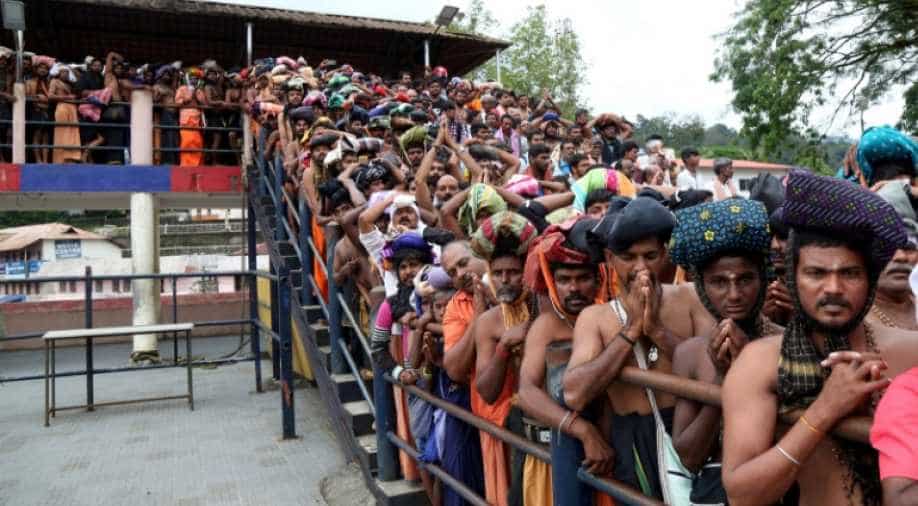 With the Lord Ayyappa temple at Sabarimala set to open for monthly poojas on November 5, the police is on high alert and tight security arrangements are in place in the backdrop of violent protests over entry of women of menstrual age last month.

According to a Kerala police release, 1,500 personnel, 100 of them women, are keeping vigil at Sabarimala and nearby areas.

A 20-member commando team has been deployed at Sannidhanam, Nilackal and Pamba, the release said.

Tantri Kandararu Rajeevaru and chief priest Unnikrishnan Namboodiri will open the temple doors and light the lamp at the 'Sreekovil' (sanctum sanctorum) on November 5 at 5 pm.

Besides the usual poojas, "Sree Chitira Atta Thirunal" special pooja, will be held on November 6 and the shrine will be closed at 10 pm.

Prohibitory order under section 144 CrPc banning assembly of four or more people will come into force at Pamba, Nilackal, Elavungal, and Sannidhanam from midnight Saturday till November 6 midnight.

Barricades have been erected at many places en route to Nilackal and police personnel are allowing vehicles only after checking.

The temple complex and nearby areas had witnessed violent protests by Ayyappa devotees against the entry of young women when it was opened for last month's poojas from October 17-22.

At least 12 women had made a vain attempt to trek the hills soon after the Supreme Court verdict permitting women in the 10-50 age group to offer prayers at the shrine.

They had to retreat following the protests and demonstrations by devotees.

Comprehensive traffic arrangements have been made by police in Pathanamthitta district where the shrine is located.

Private vehicles carrying pilgrims would be allowed to proceed only up to Nilackal, a base camp, police said.

The Kerala police have introduced online booking for pilgrims, which would enable them to conveniently choose the day and time of darshan.

According to officials, Kerala State Road Transport Corporation tickets are compulsory for all pilgrims, who reach Nilackal, except those who go by foot. The devotees can avail the ticket booking facility and choose the darshan time also.

The KSRTC has also made arrangements for the pilgrims who reach for darshan on foot, to avail online tickets from Pamba at the foothills.

Meanwhile, the state government said it was prepared to hold talks with the Nair Service Society (NSS), an outfit of the influential Nair community, which is against entry of young women into the hill shrine.

"The government is prepared to remove misunderstandings with NSS and has an open mind for talks with the outfit," Devaswom (temple administration) minister Kadakkampally Surendran told reporters.

The attack against the NSS office here Friday was "well-planned," he said.

He said the party's state president, P S Sreedharan Pillai, has received a "death threat" Saturday through speed post and the DGP has been informed.

BJP and various Hindu outfits are on the warpath against the left government over its decision to implement the Supreme Court verdict allowing women of menstrual age to enter the shrine.