Resources will be provided from central government to fight this flood situation: Rajnath Singh 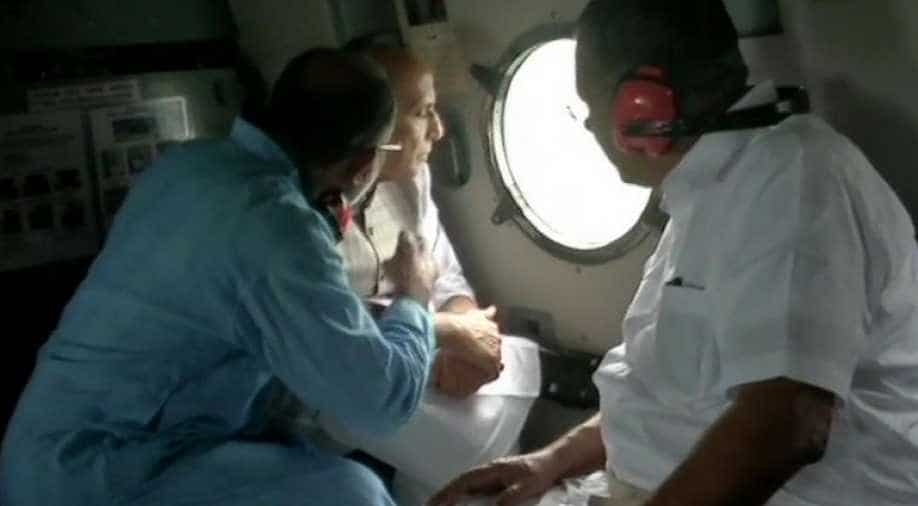 After days of incessant rainfall leading to floods in Kerala, Home Minister Rajnath Singh along with Chief Minister Pinarayi Vijayan and Union Minister KJ Alphons on Sunday undertook an aerial survey of the flood-affected regions in the state.

As per latest information, 33 people were dead and six were missing in rain-related incidents in the state. Vijayan confirmed the death of 33 people and six missing. "Such destruction has never before been witnessed in the state. The entire state has come together in these circumstances, and we are ready to do whatever is necessary," said Vijayan.

Home Minister Rajnath Singh met the victims of the flood in Kerala says, ''I would like to assure the state government that all resources will be provided from central government to fight this flood situation.'' To help the state cope with the flood situation, Madras regiment from Pangode Military Station at Idukki has launched Operation Sahyog, which is coordinated by the Indian Army's Karnataka and Kerala sub-area, headquartered at Bangalore.

Pangode Military Station, under Karnataka and Kerala sub-area of the Indian Army, deployed three columns of the army exclusively in two flood-affected districts of the state, Aluva in Ernakulam district and Adimali in Idukki district.

The army is actively engaged in the relief operations.

In addition to the evacuation of villagers, stranded tourists and establishment of connectivity, the relief operation included distribution of medicine and food in relief camps at Adimali, in Idukki district.

Over 1000 people including elderly women and children have been rescued in areas where the Indian Army's ten columns comprising more than 40 composite teams are working round the clock to ensure that the last person stranded in the floods is rescued.

Flash floods due to incessant rains have wreaked havoc in several districts of the state. From past few days, normal life in many parts has been disrupted. The areas which were worst hit are Kannur, Wayanad, Kozhikode, Idukki, and Mallapuram districts.

The Indian Army assured in its release, "The troops of the Defence Security Corps Centre and the Bison Division are operating continuously to help and rescue civil population from these inundated areas."

According to the release, "In addition to the composite teams, there are more than three Engineers Task Force including more than 100 personnel of the Indian Army who is establishing temporary bridges on washed away roads, removing debris and using Assault Boats to traverse the inundated areas in the rescue missions."

For second year in row, no chief guest on Republic day due to COVID-19 crisis