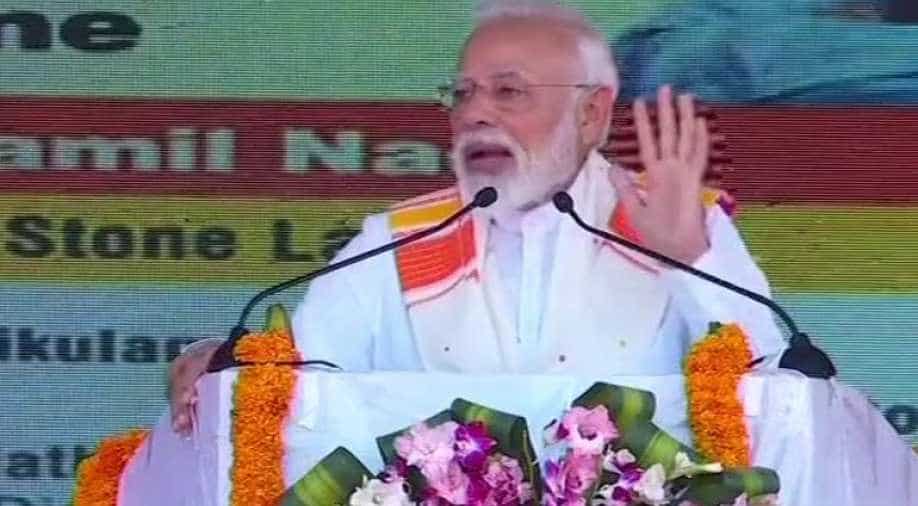 Modi also said that the entire country is feeling the absence of Rafale fighter jet aircraft and wondered what could have happened if the IAF had the fighter planes.

Prime Minister Narendra Modi on Saturday hit out at the opposition for doubting the armed forces on the anti-terror air strike in Pakistan and said the country is feeling the absence of Rafale fighter jets as the results could have been different if India had these aircraft.

He said the country has seen the influence of India's foreign policy after the release of Wing Commander Abhinandan Varthaman by Pakistan within three days of his capture.

Modi took on the opposition over the issue of air strike, saying while the entire world stood behind India in its fight against terror, some parties in the country were questioning and raising doubts.

He also hit out at his detractors, saying they are free to criticise him but their anti-Modi tirade should not harm the country's security interests and help terrorists such as Masood Azhar and Hafiz Saeed.

"India is feeling the absence of Rafale. The entire country is saying in one voice today if we had Rafale probably the result would have been different. The country has suffered a lot due to selfish interests earlier and now politics over Rafale," he said at the India Today Conclave.

He hit out at his detractors and said in their obsession to attack him, such people were harming the country and its security interests.

"One of the challenges before the country is some people opposing their own country. When the entire nation today is standing with the armed forces, some parties are casting doubts on them.

"These are the parties whose statements and articles are being used by Pakistan against India. In their fixation with criticising Modi, they are opposing the country and compromising its interests," the PM said.

"I want to ask these people whether they trust the capability of our armed forces or doubt it...A person like Modi will come and go, but India will remain...I want to tell such people that they are free to oppose Modi and point out shortcomings in the government's work, but do not help those harbouring terrorism.

"If you want to oppose Modi, do so, but do not oppose national interests. They should take care that their anti-Modi obsession and not help terrorists like Masood Azhar and Hafiz Saeed," he said at the gathering.

He said that India's unity has scared many within the country and outside. He said there was fear in the neighbouring country of the bravery and valour of Indian armed forces and it was good to learn that.

Modi said, "I can say with full confidence that the 21st century belongs to India."

On pilot Abhinandan Varthaman's release, he said, "Going by the events in the last few days, you would have seen the influence of India's foreign policy. Have you seen or not."

Modi said people had raised doubts over his experience in foreign policy issues when he took over as prime minister.
Tearing into the Congress, Modi alleged its rule saw many defence scams. "They began with jeeps and later graduated to weapons, submarines, helicopters. The defence sector suffered in the process," he said.

"Those who ruled the nation for many many years had interests in two things - doles and deals. The culture of doles and deals harmed our nation's development journey greatly.

"Why is it that those who ruled the nation for so many years have so many defence scams in their era? They began with Jeeps and later graduated to weapons, submarines, helicopters. In the process, the defence sector suffered.

Modi said during his tenure, 2.3 lakh bulletproof jackets were bought while previous Congress-led government ignored the proposal since 2009. The jackets he said were most important for the life of a soldier.

"You would be ashamed to know that not one, I repeat not one bulletproof jacket was obtained from 2009 to 2014," he said.

"In our tenure, the corridors of power are also free from middlemen because they know, this government will not tolerate any corruption," he said.

"While they (Congress) worked for 10 per cent commission, our governments work for 100 per cent mission," he noted.

Congress president Rahul Gandhi has been attacking Modi over the Rafale deal, alleging corruption and favouritism. The government has denied the charges.

The prime minister also criticised the previous Congress governments for not doing anything to implement the OROP (One rank, one pension) scheme for armed forces and asked why was there no war memorial for the martyred soldiers.

Modi noted that unlike in the past, now no one can dare to threaten India and said, "the new India is a leader, fearless and decisive", adding that his government was decisive due to the unity of the people of the country.

Modi said his government's 55 months in power and 55 years of others' rule had given two contrasting approaches to governance. Previous governments had a "token approach", "we have a total approach'," he said.

Modi said Congress government gave away doles that were not aimed at empowering the poor, who remained at the mercy of the political class.