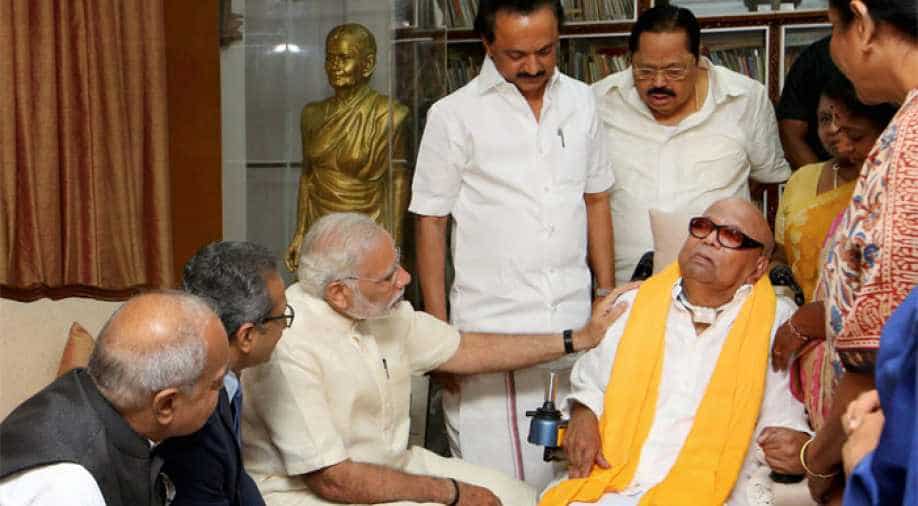 The nation demonstrated a state of grief after&nbspDravida Munnetra Kazhagam (DMK) chief and five-time chief minister of Tamil Nadu Muthuvel Karunanidhi&nbsppassed away on Tuesday in Kauvery Hospital in Chennai. He was 94.

The hospital made an official announcement informing that the former leader breathed his last at 6:10 pm.

PM Modi, in a series of tweets, wrote about Karunanidhi's achievements as a leader and&nbspmultiple interactions the two had on many occasions.

Deeply saddened by the passing away of Kalaignar Karunanidhi. He was one of the senior most leaders of India.

We have lost a deep-rooted mass leader, prolific thinker, accomplished writer and a stalwart whose life was devoted to the welfare of the poor and the marginalised. pic.twitter.com/jOZ3BOIZMj

Kalaignar Karunanidhi stood for regional aspirations as well as national progress. He was steadfastly committed to the welfare of Tamils and ensured that Tamil Nadu’s voice was effectively heard. pic.twitter.com/l7ypa1HJNC

I have had the opportunity of interacting with Karunanidhi Ji on several occasions. His understanding of policy and emphasis on social welfare stood out. Firmly committed to democratic ideals, his strong opposition to the Emergency will always be remembered. pic.twitter.com/cbMiMPRy7l

My thoughts are with the family and the countless supporters of Karunanidhi Ji in this hour of grief. India and particularly Tamil Nadu will miss him immensely. May his soul rest in peace. pic.twitter.com/7ZZQi9VEkm

Veteran actor and politician Rajinikanth also expressed sorrow following Karunanidhi's demise. "Today is a black day in my life, one which I can never forget as I lost my Kalaignar. I pray for his soul."

Today is a black day in my life, one which I can never forget as I lost my #Kalaignar. I pray for his soul: Rajinikanth on #Karunanidhi (file pic) pic.twitter.com/R8ociRQSsN

Other prominent personalities also expressed their sorrow and gave condolences to the former Tamil Nadu CM's&nbspfamily.

#India mourns the passing away of the patriarch of DMK Muthuvel #Karunanidhi. His memory shall always remain etched in the minds of the people of Tamil Nadu. I convey my deepest condolence to his family members. @mkstalin @arivalayam pic.twitter.com/0FI6K54opW

Condolences to the family and supporters of #Karunanidhi ji. May everyone maintain peace in Tamil Nadu.

I convey my deepest condolences to family members and admirers of #Karunanidhi ji on his demise. RIP

The man behind the rising son, the patriarch of #DMK, and a respected national leader @kalaignar89 is no more. He was the voice of the people of #TamilNadu. My deepest condolences to his family and to #Tamilians across the world. #Karunanidhi