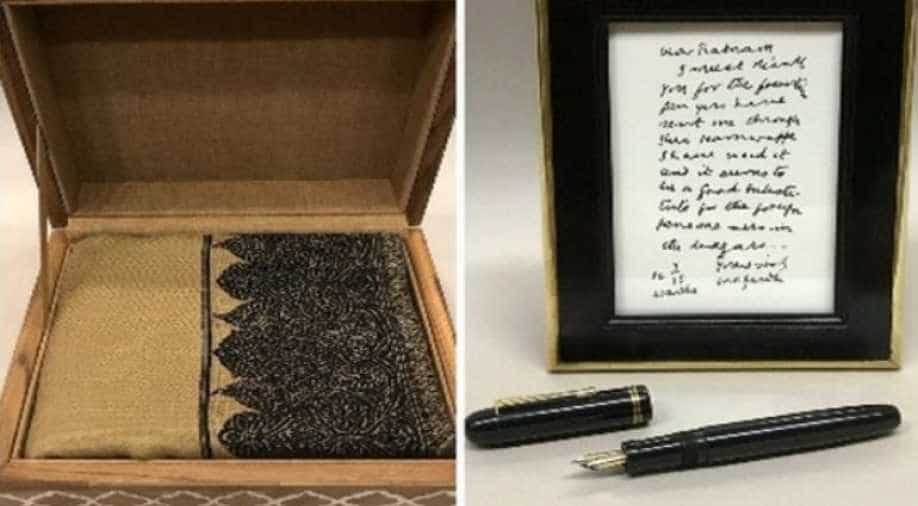 Merkel is currently on a three-day visit to India. She arrived in New Delhi on Thursday and held talks with Modi on several bilateral issues the following day.

The stole, known as 'Call of Ladakh', has an intricate traditional Ladakhi border pattern and four corner motifs, in dark wool.

The yarn is hand-spun using the finest sheep wool, on a traditional charkha, by native Ladakhi women, in the harsh winter months. The Ratnam Pen, named after KV Ratnam (originally from a family of goldsmiths in Rajahmundry) was made iconic by Mahatma Gandhi. It is still produced even today, its original form, by KV Ratnam and Sons - Ratnam Ballpen Works, a company owned by Ratnam`s descendants.

Even today, it has a barrel for filling ink using a dropper and the Genius Iridium Nib from Germany.

Notably, Mahatma Gandhi had written over 31,000 letters in his quest to take India to its freedom. Many of these letters were written using the pen that was made for him in 1934 by Ratnam, by using indigenous materials which were based upon Mahatma Gandhi's request to him to create 'swadeshi' (locally made) products - be it a pin or a pen.

A young Ratnam, took on the challenge and developed an ink pen which won him Mahatma Gandhi's praise, evident when the latter wrote him a letter saying, "Dear Ratnam, I have used the fountain pen and it seems to be a good substitute to the foreign pens, one sees in the bazaar."

A copy of the prized letter has been presented in a 'recycled wood' and brass frame, created to match the vintage aesthetic of the Ratnam pen.

Merkel is currently on a three-day visit to India. She arrived in New Delhi on Thursday and held talks with Modi on several bilateral issues the following day.

The two countries signed over 20 agreements including several in the form of Joint Declaration of Intent (JDI) in artificial intelligence (AI), education, agriculture, maritime technology sectors among others.