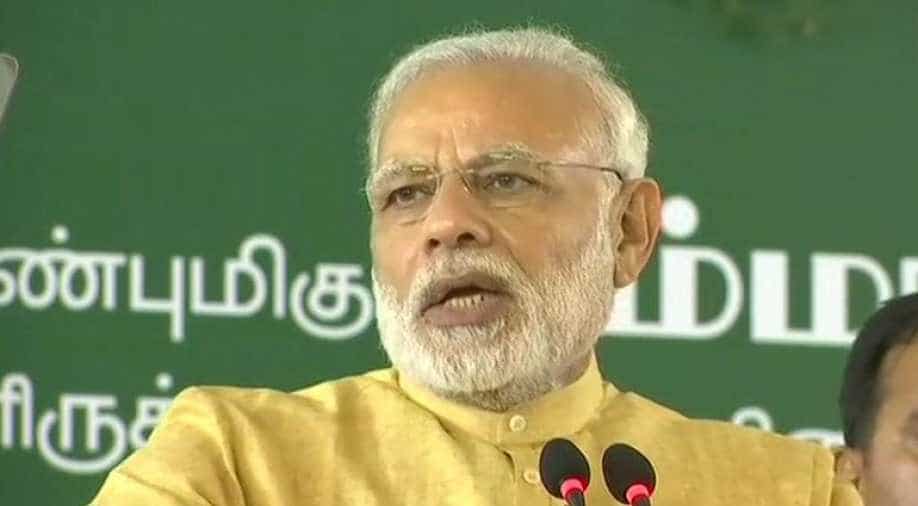 On the second day of Karnataka poll campaign, PM Modi will visit also visit Ballari and Bengaluru. India's prime minister stepped into the poll campaign on May 1 in a heated last leg burst addressing rallies in Mysuru, Udupi and Belagavi. PM Modi had addressed the farmers in Karnataka through the Namo App on Wednesday which was live-streamed across the poll-bound state.

Congress would rather prefer our soldiers go with cameras and not guns! (on Surgical Strikes) But then, this is expected considering how their own senior leader behaved on stage when 'Vande Mataram' was being sung: PM Modi in Kalaburgi #KarnatakaElections2018 pic.twitter.com/JhBr6NJ7Kf

1:12 pm: India's dream has been crushed under 70 years of Congress rule, he declared.

1:10 pm: Farmers can reap gold from the soil if given proper incentive, the PM said.

1:07 pm: Dalits have suffered under Congress' dynastic raj, he said.

I would like to ask the Congress people who carried out a candle march in Delhi where were your candles when a Dalit girl was tortured in Bidar: PM Modi in in Kalaburagi #KarnatakaElections2018 pic.twitter.com/QAAvbI0INB

12:58 pm: Congress insulted Vande Mataram, he said, adding, the Congress has no respect for the nation's soldiers.

12:57 pm: Congress referred to our Jawans(soldiers) as goons, he alleged.

12:55 pm: The Congress politicised the surgical strikes, he said referring to the strikes carried out by the Army along the LoC in 2016.

Karnataka is synonymous with valour. But, how did the Congress Govts treat Field Marshall Cariappa and General Thimayya? History is proof of that. In 1948 after defeating Pakistan, General Thimayya was insulted by PM Nehru and Defence Minister Krishna Menon: PM Modi pic.twitter.com/OGOUaQDvEe

12:51 pm: These elections about the youth and farmers, he asserted, adding, the Congress has destroyed Karnataka.

12:48 pm: Karnataka will vote against Congress, he asserted.

12:42 pm: Karnataka can bear the heat but not the Congress, the PM added.